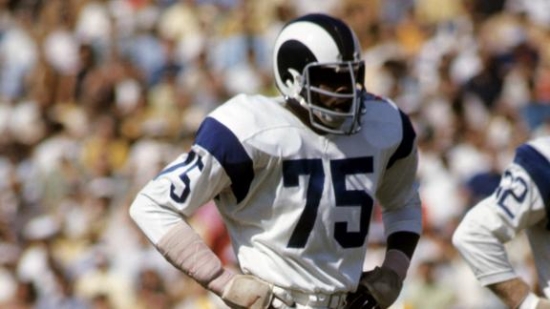 If we were to have made this list based on their iconic stature, Deacon Jones would have been #1 and not #2.

Honestly, he almost was at that the top!

It was Deacon Jones that came up with the term "Sacking the Quarterback" and as such his style of play revolutionized the idea of what a Defensive Player could be.  Jones helped make the idea of being a defensive player a star, and arguably his entire career occurred by accident as he was late round (14th) pick who was chosen for his only for his athleticism and not for his football skill.  Becoming what would be part of the Rams "Fearsome  Foursome," Jones was a pass-rushing dynamo who would (unofficially) sack the QB well over 150 times as a Ram.  He was a five-time First-Team All-Pro and seven-time Pro Bowl With Los Angeles and was quickly the star attraction of the organization.

Despite the hefty (and warranted) praise we are heaping on Deacon Jones, the only reason he did not make the top of this list is that his tenure was not as strong as some of the other elite players here and that does work against him, although his overall tenure with the Los Angeles Rams is undoubtedly impressive.

Jones would enter the Pro Football Hall of Fame in 1980, his first year of eligibility.  Later, in 2009, the Rams retired his number 75, and he was named to the NFL 100th Anniversary Team.