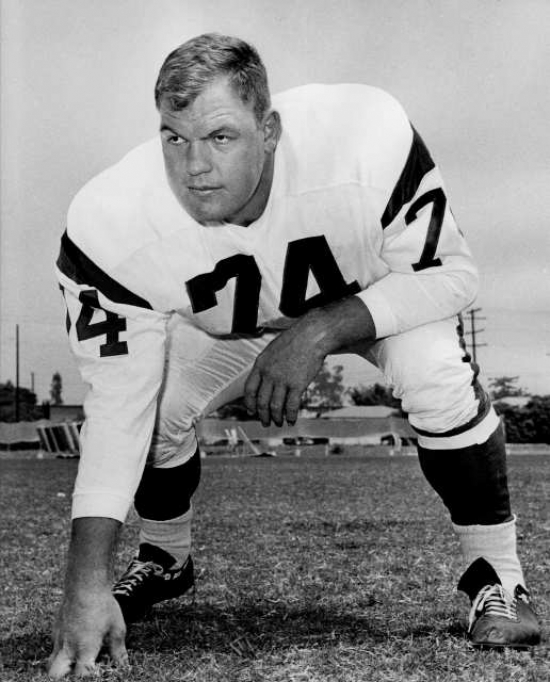 With the vast amount of players who suited up for the Rams (regardless of the city) that it would be difficult to narrow it down to one player, and it certainly was.  There were other Pro Football Hall of Famer with whom we easily could have slid into the top spot, but we elected to go with Merlin Olsen, the ultimate coach's player who led by example and who went down in history as one of the most outstanding Defensive Tackles the game has ever seen.

The Outland Trophy winner from Utah State was the third overall pick in the 1962 Draft, and as a rookie, he would go to the Pro Bowl.  That was the first of fourteen straight Pro Bowl appearances for Olsen, which set a record that has since been tied but not surpassed.  Olsen would anchor the Rams defense where he was part of the greatest group of Defensive Linemen of the 1960s, "The Fearsome Foursome," consisting of Olsen, Deacon Jones, Rosey Grier, and Lamar Lundy.

Not only was Olsen good, but he also seemed to be good forever.  In addition to those 14 Pro Bowls, he would be considered an elite performer for most of those seasons.  Olsen was named a First Team All-Pro five straight seasons (1966-70) and was a Second Team All-Pro another four times.  So respected was Olsen that in 1974 he would become the Bert Bell Award winner (becoming the second defensive player to do so), which is presented by the Maxwell Football Club to whom they deem the MVP.  Realistically, if Olsen was going to win this award, it should have been in an earlier year, but in true Olsen fashion, he thanked all defensive players.  This man was indeed was a class act!

A member of both the 1960’s and 1970’s All-Decade Team, Merlin Olsen would enter the Pro Football Hall of Fame in 1982, his first year of eligibility, and he would go on to have a successful career as an actor and broadcaster.  The Rams retired his no. 74 and in 2020, he was posthumously named to the NFL 100th Anniversary Team.