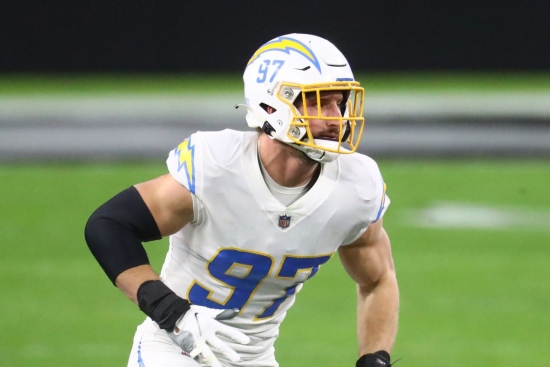 Joey Bosa was a beat at Ohio State, earning two All-American honors, the Nagurski-Woodson Defensive Player of the Year and winning the National Championship.  The Chargers used their Third Overall Pick on the Buckeye, and it proved to be the correct decision.

Bosa won the Defensive Rookie of the Year (2016) in a year that we had second in Tackles for Loss (17) and had 10.5 Sacks.  He missed out on a Pro Bowl, but wouldn’t in 2017, where he had 12.5 Sacks and was considered among the best Defensive Ends in Football.  Injuries held Bosa to only seven Games, but he rebounded in 2019, going to his second Pro Bowl, which was followed by a third in 2020.

As of this writing, Bosa is entering his sixth season, with 47.5 Sacks and 68 Tackles for Loss.  He has a lot more rungs on this list that he could easily climb.

Tagged under
Tweet
More in this category: « 49. John Jefferson