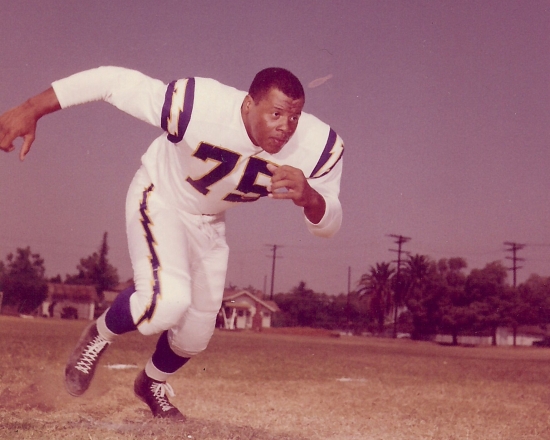 “The Big Cat” Ernie Ladd, was one of the star defensive players at Grambling, and standing at 6’ 9” he was one of the most imposing players in the gridiron ever saw.

Historically Black Colleges were not heavily recruited by the pro leagues in the 1960s, and as such, the San Diego Chargers were able to steal Ladd with their Seventh Round Pick.  Playing at Defensive Tackle, Ladd brought size and strength to the Charger D-Line, and in the five seasons he played for the Bolts, he was a four-time AFL All-Star and three-time First Team All-Pro.  Ladd helped San Diego win the AFL Championship in 1963, and as good as he was, he developed another passion, professional wrestling.

Ladd signed with the Houston Oilers after the 1965 season, as the Chargers were informed by Ladd he might wrestle full-time, which he did two years later.  In 1981, "The Big Cat" was inducted into the Chargers Hall of Fame.