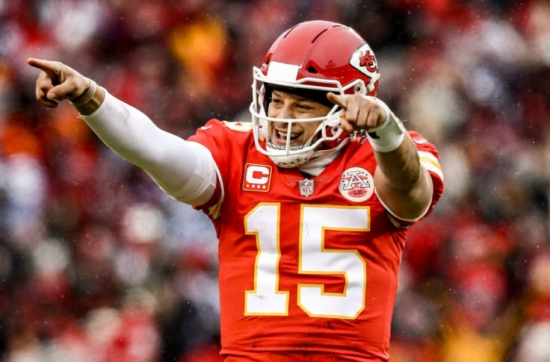 The Kansas City Chiefs have been around a long time, and many Hall of Famers have called KC home.  This would you make you expect that a player that has only suited up for a few years as a Chief could not crack this list so high, so early. Patrick Mahomes was not aware of this expectation.

Taken with the 10th Pick in 2017, the Quarterback from Texas Tech was an understudy to Alex Smith as a rookie, but the plan was for him to take over in 2018, and boy, did he ever!   In 2018, Mahomes threw for 5,097 Yards with a league-leading 50 Touchdowns against only 12 Interceptions.  Mahomes proved he could use his legs, but with a cannon-like gun he has for an arm, he was a pass-first QB despite his ability to be the other.  Mahomes was the AP MVP, PFWA MVP, Bert Bell Award Winner, and the Offensive Player of the Year in 2018, and he was also a First Team All-Pro.

Mahomes missed a pair of Games in 2019 due to injury, but he still threw for over 4,000 Yards with a sparking TD Ratio of 26-5.  More importantly, he took the Chiefs to their first Super Bowl win in 40 years, defeating the San Francisco 49ers.  Mahomes was named the Game’s MVP, throwing for two TDs, and rushing for another.

The Quarterback again had a great 2020, with 38 Touchdowns and 4,740 Passing Yards.  Mahomes again led Kansas City to the Super Bowl, but that second ring eluded him as Tom Brady, and the Tampa Bay Buccaneers would not be denied.  Mahomes again went to the Pro Bowl in 2021, with another post-season trip.

Entering the 2022 season as one of the top Quarterbacks in Football, do we have a player who could rise to the top of this list?