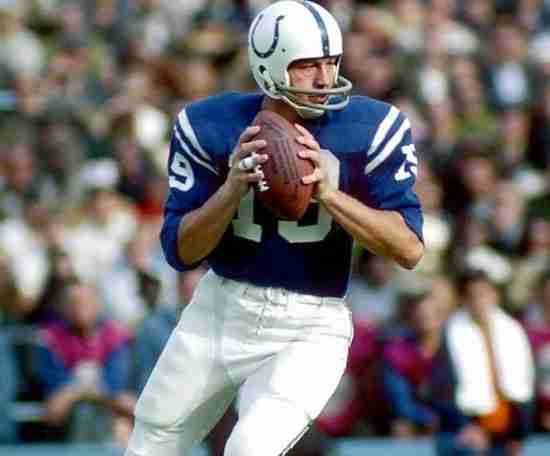 Had it not been for the greatness of Manning, Johnny Unitas would easily be at the top of this list and certainly would be for over half of the NFL teams in existence.


Unitas is considered by many (and include us in that category) as the games first modern Quarterback, an incredible accomplishment for someone who was not drafted in the top 100.

“Johnny U” took over the reigns full time in 1957 and promptly took the Colts to their first winning season.  The following season was even more magical.  Unitas took his team to the NFL Championship and won the game in what was then called “The Greatest Game Ever Played”, a win in overtime that cemented the National Football League as a television juggernaut.

Unitas would top that in 1959, again winning the NFL Title and this time winning his first of three MVPs.  Four times Unitas would lead the NFL in Touchdown Passes and four times he would lead the league in Passing Yards.  The revolutionary pivot and five time First Team All-Pro selection was elected to the Pro Football Hall of Fame in 1979, his first year of eligibility.  The Colts also retired his number 19.