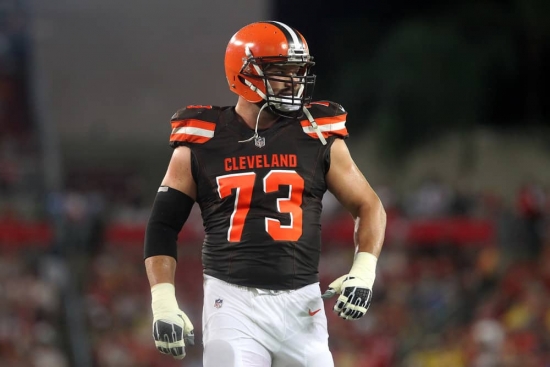 The second incarnation of the Cleveland Browns had a bad start.  Going one step further, there is no inaccurate negative pejorative you could use to describe their first 20 years.  One thing they universally did perfectly was select Joe Thomas with the Third Overall Pick in the 2007 Draft.

Thomas, who won the Outland Trophy in 2006 with Wisconsin, was an All-Rookie and Pro Bowler at Left Tackle, and he did not miss a play as a rookie.  That is impressive enough, but he never missed a snap until the 2017 season, participating in 10,363 consecutive, a record, although that was not recorded until 1999.

Thomas was not just an iron man; he was outstanding at what he did.  He was named to six First Team All-Pros and was a Pro Bowler annually from his rookie season (2007) to 2016.  An innovator with his shotput style in pass blocking, Thomas was hard for defenders to figure out.  He rarely allowed a sack, and even less was called for holding.

Named to the 2010s All-Decade Team, Thomas's Browns teams only won 48 Games to 128 Losses.  It is an abysmal record, but where would they have been without him?

Thomas is considered to be one of the best Left Tackles in the history of the game.  He was named to the Browns Ring of Honor in 2018.