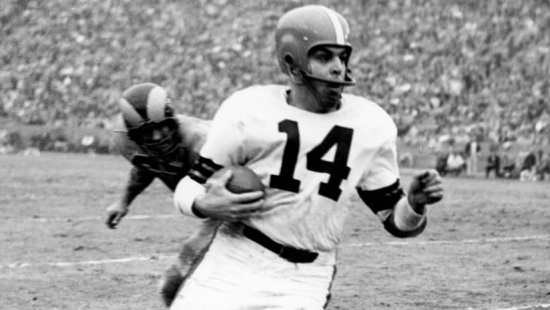 We believe Jim Brown is the greatest Cleveland Brown of all time, but it was Otto Graham who was the first team legend.

Playing for Northwestern, Graham was the Big Ten Player of the Year in 1943, and he was third in Heisman voting. Following his career as a Wildcat, Graham enrolled at Colgate for flight school, and he continued to participate n athletics, mainly basketball.

Paul Brown was putting together a football team for Cleveland in the new All-American Football Conference, and he looked to Graham to be the centerpiece of his new squad.  In the four years of the AAFC's existence, Graham was arguably the league's best player, as the Quarterback meshed perfectly with Brown's offensive vision.  Cleveland won all four of the AAFC Championships (1946-49), with Graham leading the league in Passing Yards the last three years.  Going into the 1950 Season, the AAFC merged with the NFL, with the Browns being one of the surviving teams.  Few people thought they would repeat their success as an NFL team.  Graham had other ideas.

Graham entered the Pro Football Hall of Fame in 1965, and his number 14 was retired by the team.  He was also part of the inaugural Browns Ring of Honor in 2010.  The NFL also named Graham to the 1950s All-Decade Team and the 75thand 100th Anniversary Team.