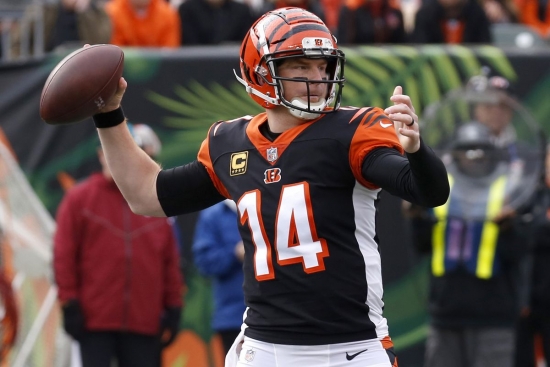 From TCU, Andy Dalton won the starting job in the pre-season of his rookie year (2011).

Dalton went to the Pro Bowl in his inaugural NFL campaign, and he brought the Bengals to the playoffs.  Over the next three seasons, he remained one of the better Quarterbacks in Football, bringing Cincinnati to the playoffs in all of those years with a second Pro Bowl coming in 2014.

The Bengals struggled afterward, though Dalton was still performing well, going to a third Pro Bowl in 2016.  With the Bengals, he had eight 3,000 Yards seasons.

The end of the “Red Rifle” in Cincinnati was rather unceremonious, as he was released following the selection of Joe Burrow (#1 overall) in 2020.  In his final season, the Bengals benched him, but it was widely believed that Cincinnati’s woes were not due to their starting Quarterback.  Overall, Dalton threw for 31,508 Yards, and 204 Touchdowns as a Bengal.