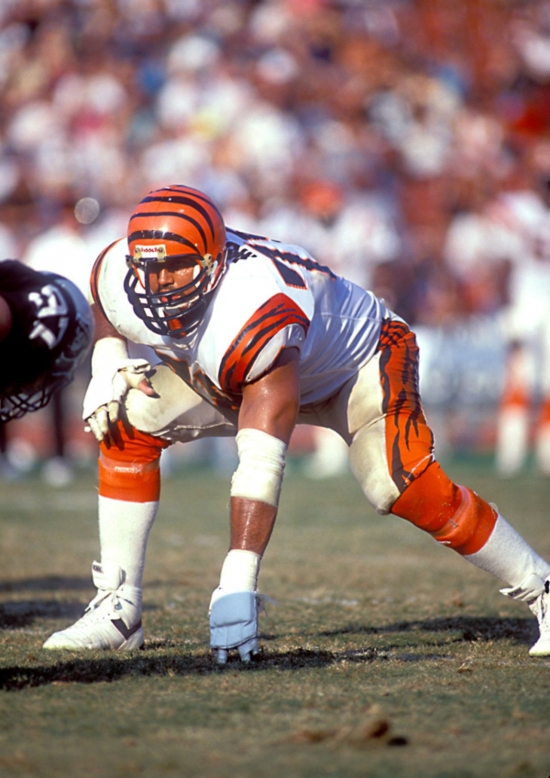 The 1980 Draft yielded three future Hall of Famers, and the Cincinnati Bengals, who had the third pick, took the best of them all that year, Anthony Munoz.

Two years earlier, Munoz had one of the best years that a college athlete could have as he was a member of both the National Champions in Baseball and Football at USC.  Football was where he was at his best, and he proceeded to become the best Offensive Lineman of the 1980s.

After being an All-Rookie, Munoz rattled off 11 straight Pro Bowls, and was a First Team All-Pro in nine of them, and was a Second Team Selection in the other two.  Munoz was so dominant that the NFL Alumni Players Association named him the Lineman of the Year four times.  While the Bengals have never won the Super Bowl, they made it to the game twice, and Munoz was without a doubt a reason for those AFC Championships.  Nobody wearing the Bengal stripes worked harder in the weight room than he did, and by evidence of his Man of the Year Award in 1991, no other athlete in Cincy gave as much back to the community.  Notably, he was able to come off the line as an eligible receiver and had four Touchdown Receptions over his career.  Munoz's last year was in 1992, which was beset by injuries and held him to eight Games.  He attempted a return with Tampa Bay in 1993, but he was released before the season began. Munoz finished his career with 185 Games, starting all but one.

Munoz would enter the Pro Football Hall of Fame in his first year of eligibility in 1998, and he is also a member of the 1980s All-Decade, 75thAnniversary, and the 100thAnniversary Team. It could be a long time before any player supplants Munoz at the top of this list.  Frankly, it may never happen.