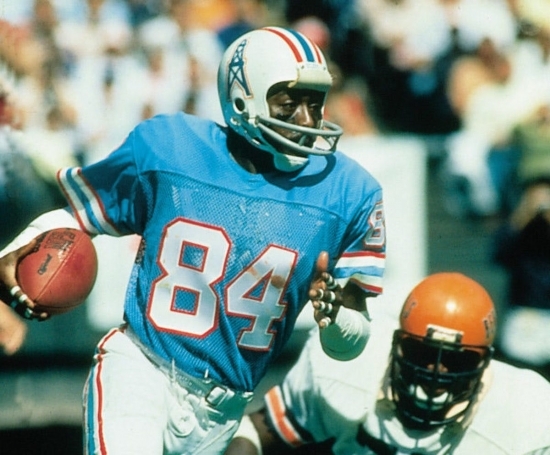 A 15th Round Pick from Widener, Billy "White Shoes" Johnson would become one of the most exciting players in the National Football League almost as soon as he arrived.  Chosen by the Houston Oilers, Johnson played at Wide Receiver (accumulating 4,211 Yards with 25 Touchdowns over his career), but it was as a Returner where he excelled and made magic happen.

As a rookie (1974), he would lead the NFL in Return Yards (1,194), and he would finish in the top five in that stat the next three years.  Johnson would become known for his touchdown dances (he is believed to have been the first to do that) and bright white shoes (hence the nickname).

After his run with the Oilers ended in 1980, he would play a season in the Canadian Football League and would return to play five seasons with the Atlanta Falcons and another with the Washington Redskins.  Johnson would go to three Pro Bowls (two with Houston and one with Atlanta) and had 10,785 All-Purpose Yards over his career.

Johnson would be named to both the 1970s and 1980s All-Decade Team.  How many Hall of Famers can say that they have been selected to two of them?

Should Billy "White Shoes" johnson be in the Hall of Fame?