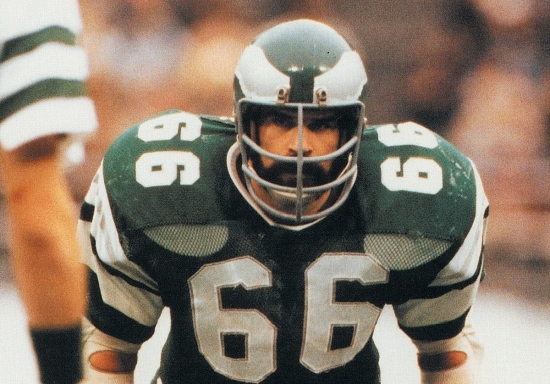 Bill Bergey came to the Cincinnati Bengals from Arkansas State, where, as a rookie, the Linebacker would go to the Pro Bowl.  Bergey didn't make a Pro Bowl again as a Bengal, but he was undoubtedly a strong player who was coveted by Cincinnati until they became upset with him.

Bergey signed a "futures contract" with the Florida Blazers of the World Football League, which would have taken effect in 1976.  The Bengals opted to trade him instead of keeping someone who would be gone in two years, and off he went to the Philadelphia Eagles, which is where he continued his career.  As the WFL did not last long and the Blazers were not in existence in ’76, thus the Eagles came out way ahead in this trade.  This turn of events had to irk the Bengals to no end as in 1974 and 1975, he was named a First Team All-Pro, was an elite tackler (he would have a 233 Tackle season), and when his contract was up, he resigned with the Eagles.  Bergey would go on to have three straight Second Team All-Pros (1976-78) and would help the Eagles reach Super Bowl XV.  He would also go to four more Pro Bowls with Philadelphia.

Should Bill Bergey be in the Hall of Fame?