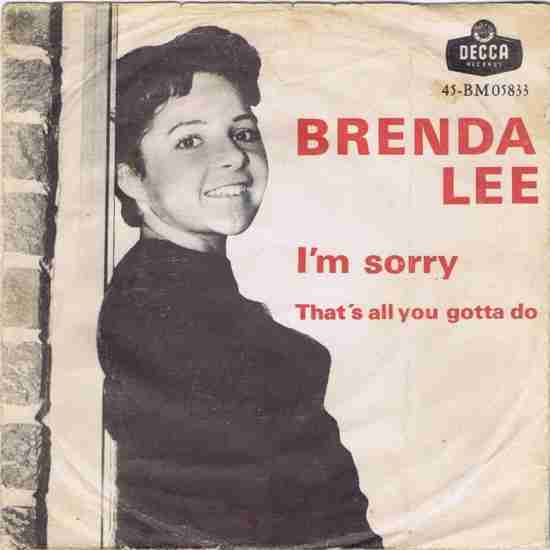 
It wasn’t that long ago that I decided on one of my I-Phone music apps to listen to the best of Brenda Lee, and though I had heard all of those songs before, I hadn’t really paid that much attention to her music before and in fact I am not sure that I could have picked out her publicity photo in a police lineup.

Scratch that, as I know for sure I would not have been able to.

We all do it.  We hear a song for the first time, or perhaps over and over again and at the very least we subconsciously imagine what the singer looks like.  Some of the best moments on NBC’s talent show, “The Voice”, comes from when the celebrity judges who have their backed turned to the contestants, and are shocked when they see the body attached to the “voice”.[1]   I had a similar type of reaction when I discovered that these soulful and powerful songs came from a tiny 4’9’’ teenager who was only fifteen when “I’m Sorry” went number one.

I have always hated the term “child prodigy” as it has been attributed so many times to kids who could never live up to such lofty expectations, but for Brenda Lee it was accurate.  Lee (born Brenda Mae Tarpley) had already received significant attention from her performances and was signed by Decca Records by the age of eleven and after three years she cracked the top ten with “Sweet Nothin’s”, which went number four in 1959 and would record the year before one of the most enduring Christmas songs ever with “Rockin’ Around the Christmas Tree”.

Lee’s management team had her sing soft rock and rockabilly songs, often at the expense of what probably could have been one of the biggest country careers of the era had she been pushed in that direction, but with her overall success ratio are there really that many people complaining?

1960 would see her join Connie Francis at the top and the song that put her there, “I’m Sorry”, would become her signature song.  Now normally when you think of a song featuring the loss of love, you wouldn’t think a fifteen year old (especially one who looked twelve like Lee) could possibly understand it, and maybe she didn’t, but with a voice like hers it didn’t matter.

Originally a B-Side to “That’s All You Gotta Do”, which too was successful going to #6, “I’m Sorry” received significant airplay and this was what propelled her to the top.  Even though she was so young, the lovelorn aspect of the song meant something to different to the younger teens who thought they knew what love was and the older teens and twenty somethings who linked it to a past experience.

Francis and Lee may not have been singing about female empowerment, but they were proving that women could sell records in the rock era; necessary groundwork for what was to follow.

[1] Although I am not a singing judge on NBC, my closest parallel was for a company I worked for in the 90’s and for the first five months remembering thinking that the receptionist at the company had the hottest voice ever.  When I met her she looked like Darth Vader after Luke removed his mask at the end of Return of the Jedi.
Last modified on Thursday, 02 November 2017 14:04
Tagged under
Tweet