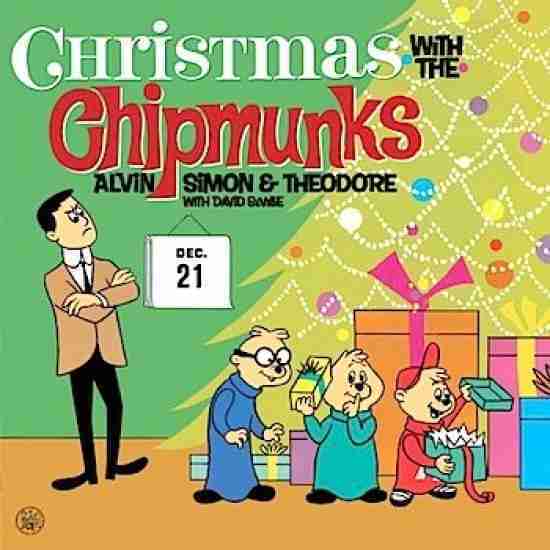 
The second of two number one songs attributed to David Seville saw the man named Ross Bagdasarian’s alter ego take second billing behind what he knew was the star; his own voice in high speed.

In the brief time between Bagdasarian’s first and second (and last) number one hit, the high-pitched recording had taken on a life of its own and he was smart enough to christen his creation, “The Chipmunks”, complete with their own personality, one so strong that he would take the lead making the group forever known as “Alvin and the Chipmunks”.

With the Chipmunk Song, also known as “Christmas, Don’t Be Late” Bagdasarian showcased the first time where David Seville bellowed “ALVIN”, after he was late to begin singing. Alvin receives a bit of a solo, where he exclaims his desire to get a hula hoop for Christmas, which was first distributed in 1958 to massive sales and was the ‘must have’ for many kids that holiday season.[1] The end of the song saw the Seville bicker with the Chipmunks who wanted to keep singing, and without banging it over the listeners’ heads, we learned that the Chipmunks (as the real creatures are) were a mischievous bunch, and Alvin was the de facto leader of the group.

Perhaps the other key words in that last paragraph is “holiday Season”, as Bagdasarian has done what nobody else has done since, take a Christmas song to the top of the charts.

I was a little surprised to learn that as come Christmas season (or at least in the malls, on November 1) we are constantly blasted with seasonal songs, many by huge artists and they are almost always the same ones, so surely one of them went to the top right?[2]

Here is a list of some of the Christmas songs burned in my memory, some for the better and some for the worse, and their peak position:

Here Comes Santa Claus by Elvis Presley did not chart in 1957.

Christmas (Baby Please Come Home) by Darlene Love did not chart and was released in 1963.

It’s The Most Wonderful Time of the Year by Andy Williams in did not chart and was release in 1963.

Little Saint Nick by the Beach Boys was released in 1963 but did not chart.

Holly Jolly Christmas by Burl Ives did not chart in 1965.

Happy (X-Mas) War is Over by John Lennon/Yoko Ono and the Plastic Ono Band did not chart in 1971.

I Wish It Could Be Christmas Everyday by Wizzard in 1973 did not chart.

Santa Claus is Coming To Town by Bruce Springsteen was released initially in 1975 and again in 1982, but neither charted.

The Little Drummer Boy by Bing Crosby and David Bowie did not chart in 1977.

Wonderful Christmastime by Paul McCartney did not chart in 1979.

Christmas Wrapping by the Waitresses did not chart in 1981.

The Twelve Days of Christmas by Bob & Doug McKenzie did not chart in 1981.[3]

I Saw Mommy Kissing Santa Claus by John Mellencamp did not chart in 1987.

I am sure there are a lot more that hold a little bit of value to me, but researching this took long enough and I will let someone else talk about Christmas songs. Personally, unless it is the 24th or 25th of December, I really don’t want to hear any of them. Let’s leave Christmas songs on Christmas shall we? I also need to mention that with the with the above chart positions for the above holiday songs (with the exception of RUN D.M.C.) only reflect the Hot 100, and no other chart. There is actually a Christmas Chart and I have zero interest in recapping that.

Now if those same songs and others of the same ilk have a couple of solid weeks of airplay annually it stands to reason that there is some serious coin to be made from the days leading up until December 25. I remember specifically listening to Artie Lange when he was still with the Howard Stern Show stating that every Christmas, he earned a decent revenue stream for his appearance as a drunken Santa Claus in the Will Ferrell film, “Elf” because it was run often on television during the holidays. Now, if he felt that was decent revenue, what are the people making annually who recorded very successful Christmas songs?

It has to be substantial right? It seems that every pop artist takes a crack at a Christmas album hoping for one of those breakout songs that will make the annual rotation and get their own annual “Christmas bonus”.

Going back to The Chipmunks, as I discussed and as you probably already knew already before you started reading this series you that the Chipmunk brand has been a revenue generator for years, though you may not have been aware that beyond the two songs we talked about they appeared on the charts additional times. Most of that success appeared shortly after the period we are talking about as they (Ok, it was really just Bagdasarian) went to #3 in 1959 with “Alvin’s Harmonica”, #16 in 1959 with Ragtime Cowboy Joe and #33 in 1960 with Alvin’s Orchestra.

In what was a major surprise for me to learn, their covers following their film releases earned them a few top 100 hits with “Bad Day” going to #67 and “Funkytown” going to #88 in 2008. Reworked versions of the “Witch Doctor” and “The Chipmunk Song” went to #62 and #68 that same year. Here’s an even bigger shock…The Chipettes went to #101 covering Beyonce’s “Single Ladies” in 2001.[8]

I think I have spoke enough about anthropomorphic animated rodents, don’t you?

[1] Amazingly, both the hula hoop and the Chipmunks are still very well known today, which considering that many in 1958 thought they would both disappear within a year.
[2] Bing Crosby did go #1 with “White Christmas” in 1942, but for our purposes we are talking about the Rock era. Jimmy Boyd also went to #1 with “I Saw Mommy Kissing Santa Claus”.
[3] My fellow Canadians know EXACTLY why this is on the list.
[4] Although you can argue this is not a Christmas song, this is hands down my favorite.
[5] Ariana Grande had a cover that went to #96 in 2013.
[6] For the record, I agreed with Argyle and not John McLean that this is a Christmas song.
[7] This is not a typo. It’s peak from the 1961 re-release happened in January of 1962.
[8] Is it just me, or is there something a little off about the pre-teen animated chipmunk singing “if you like it then you should have put a ring on it”?   Actually the whole concept of the Chipettes freak me out.
Last modified on Monday, 12 September 2016 13:59
Tagged under
Tweet

More in this category: « To know Him Is To Love Him Smoke Gets In Your Eyes »