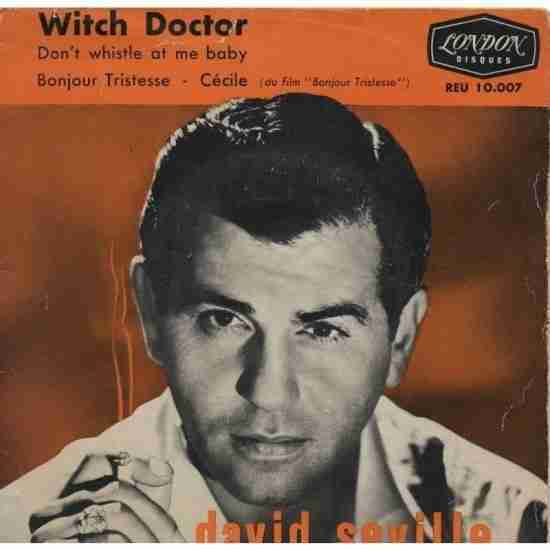 
Technically I lied in my Introduction when I stated that Alvin & the Chipmunks had two number one hits in the 1950’s. Erroneously, I forgot that when “Witch Doctor” went to the top of the charts, it was billed to only David Seville, the creator of the Chipmunks, but at the end of the day they still had more number ones on the main chart (their second number one, which was billed as the Chipmunks with David Seville) in that decade than Jerry Lee Lewis, Carl Perkins, Little Richard and Chuck Berry combined. Apologies to all of you, but doesn’t it make better copy to say the Chipmunks have Chuck Berry beat 2-0 than saying that David Seville accomplished it?

The name of David Seville was actually a stage name, as he was born Ross Bagdasarian to Armenian parents.[1] Seville actually had a bit of success prior to the Chipmunks idea, as he had acting credits to his name, albeit very small roles, but it was in films like Rear Window, Viva Zapata!, The Greatest Show on Earth and Stalag 17.

He had also co-wrote a song that would eventually go number one with his cousin, William Saroyan, who was one of the most respected authors of his generation, and was a former Pulitzer Prize winner and Oscar winner in 1943 for the film adaptation of his book, the Human Comedy.

That song, “Come on-a My House”, came from Saroyan’s The Human Comedy, which they would record as a duet (Saroyan doing the narrative, while Bagdasarian would do the singing in a dialect) to little fanfare, but it would be recorded by Rosemary Clooney who went to the top with it.[2]

Seville would continue songwriting, though would do so in the novelty song variety, which as we talked about had significant traction in the 1950’s. He would have a few minor hits, but it was when he bought a tape recorder with varying speed capabilities that he would strike gold.

According to his son Ross Bagdasarian Jr., Seville spent 190 of his last 200 dollars on the device, though considering he was working and selling records, I have to wonder if that just made a better story. No matter what the return on investment proved to be exponential.

Using the variable speeds, he was able to create high-pitched voices, which would later become the Chipmunks. Seville would write the “Witch Doctor”, a simple song where a man seeks advice from the Witch Doctor on how get the affection of a girl he was enamored with. The main portion of the song was Seville’s own voice, and he used the high-pitched process for the chorus:

It was nonsensical, but it was damned catchy, especially with that chipmunk-sounding chorus that nobody had ever heard before. The kids loved it, the teens found it fun, and the adults, despite the simplistic nature of the song enjoyed singing along to it. Seville had a goldmine on his hands and before long characters were created to match the high-speed voice.

The results was Alvin, Simon and Theodore, which would become one of the most known animated characters spawning albums, television series and movies and is still a cash cow today.[3]

Later re-recordings of the song would be attributed to Alvin & the Chipmunks and before long varying speed recordings were everywhere, though few done as well as this. This was a market that had a life to it, and as we will soon see, Ross Bagdasarian was not going to let anyone else do it better.

We can easily argue that he never did.

More in this category: « Tequila All I Have To Do Is Dream »