It's Only Make Believe 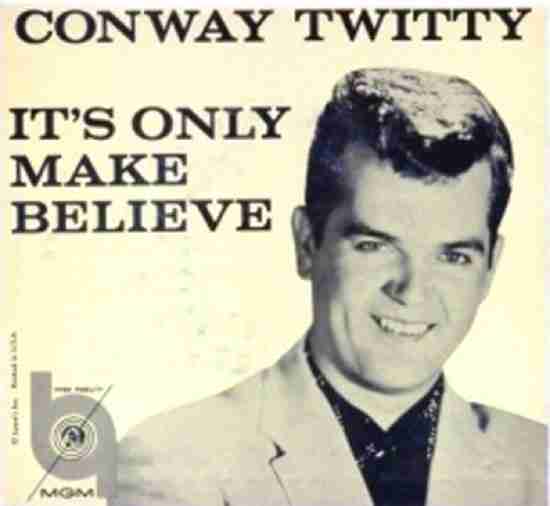 
I know I should keep my personal biases in check, but anyone who knows me can tell you that my filter is not always operational, though it does continue to mellow with my advancing age.[1] My late teen/early twenty something version would dispense my pop culture musings to anyone (whether they asked or not) and never was that soapbox bigger when it was a performer I didn’t care for.

You already know where this is going right? For years I was creeped out my Conway Twitty.

Now I didn’t grow up appreciating country music, and the self-professed music snob in me looked down on it in my youth. It probably didn’t help that my only early exposure to it was the rare times my maternal grandparents would watch me while my parents were away and my Grandpa, an avid Country Music lover would watch Hee-Haw.[2] [3] Shortly after, I would notice, even in that limited era of television channels that the syndicated show was everywhere, but no matter how much exposure it had and how long it ran, I never did get it’s appeal.

Forget that I wasn’t into the music that was on the show. I didn’t find the jokes funny and thought the skits were terrible. I legitimately wondered how anybody watched this crap, and painted a brush over anyone associated with as someone I would have no interest in.

One of those musical artists that I remember performing on the show was Conway Twitty, who I knew was a perceived legend in the Country genre, but I could never get past one song that I saw him perform, and always seemed to be in country music compilation albums being sold. That tune was “You’ve Never Been This Far Before”, which was essentially about Conway taking someone’s virginity.

To me (and kind of still does when I look at old pictures of him) Twitty looks like someone’s disturbing uncle, the one you try to avoid at family gatherings because he might hit on his niece. That song didn’t help much, especially when sung by someone in his thirties, who looked like he was in his forties. I knew he was a man who had a plethora of other top country hits but I had no interest in getting to know a single one of them.

That was then, and this is now, and my appreciation for country music has skyrocketed and the layered storytelling out of Nashville holds a large portion of my I-Pod, which ironically enough started from a friend telling me I had to listen to former Hee-Haw’s co-host, Buck Owens, specifically his 1967 live album from Japan. He challenged me on many of the bands I was listening to at the time and really to explore the country roots.

Within a year, I not only explored all types of musical fusion but the origins of where my favorite music came from, many roads leading to 1950’s and 60’s country and to my surprise, Twitty was quite the early Rockabilly performer whose lone number one Hot 100 hit was more in a rock vein than the Country one I had only associated him with.

“It’s Only Make Believe” had that late 50’s Rock twang, but it had that country story telling that would serve him so well throughout his career. The song is about how the love of his life doesn’t share the same feelings; hence it is only “make believe”. Twitty, with his soft yet stern delivery may sang from the heart, or at least his listeners thought so and it made him a major chart topper on the Country charts for years, and though he did not go number one on the Hot 100 again, he went number one on the Billboard Country Charts thirty-five times.

Perhaps it was this adult feel, without feeling like “adult contemporary country” that made Conway such an everlasting star in the country field, and since the sexuality was somewhat veiled in this particular song (and let’s face it, most people don’t pay attention to all of the lyrics) it had a broader appeal.

As for my own personal stance on Twitty, it has curtained softened considerable, though I still find that song exceptionally off-putting and haven’t quite found myself listening to his back catalogue without envisioning the woman who had “Never Been This Far Before.”

So isn’t this the perfect time to do a cut away?

None. [1] Actually that is only true when my wife is around.
[2] Wait, did I just reference Hee-Haw twice in this anthology before I even got to 1960?
[3] Sadly, one of my most vivid memories of Grandpa and Country Music, was his complete hatred of Charlie Pride, usually punctuated in his broken Quebecois flavored English, “I don’t like that Negro.” My other grandfather is German…so yes there are for more racist related stories with him coming through this series.
Last modified on Monday, 15 August 2016 01:53
Tagged under
Tweet

More in this category: « It's All In the Game Tom Dooley »