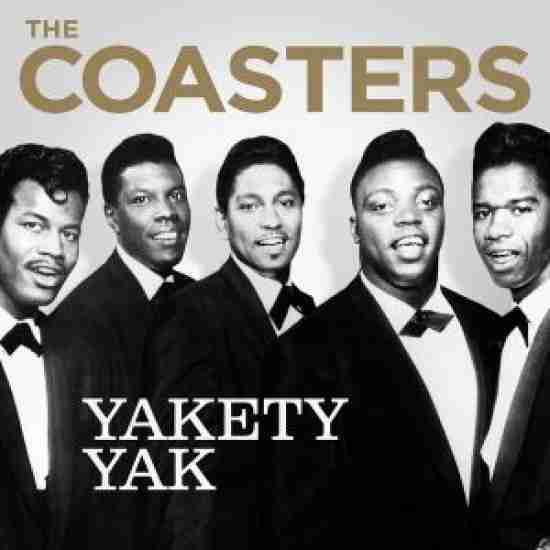 
I have read multiple websites that have described “Yakety Yak” and “Charlie Brown” as novelty songs, and while those songs were comedic in nature, it is a brush I just don’t feel comfortable painting them with. The Coasters were far more than that.

Beginning as a spinoff from the Robins, an early 1950’s R&B band, the Coasters would have a pair of top ten hits (“Searchin’” & “Young Blood”) that both went to number one on the R&B Charts. Those songs were written by a pair we have talked about: Jerry Lieber and Mike Stoller, who might as well have had gold emanating from their fingertips as in the 1950’s it seemed like they could do no wrong.

Yakety Yak would be the third number one on the R&B Chart and the first and only number one on the Top 100 for the Coasters, which was a humorous look at the dilemma of a teen who has to do chores around the house or they “ain’t gonna Rock and Roll no more”. The rebellious teen responded to his taskmaster with “Yakety Yak” only to again be put in his place with a baritone of “Don’t Talk Back”.

The song resonated with the youth, both white and black, and with the legendary King Curtis playing a blistering sax this was not just a comedic song but was a powerful Rock and Roll song that helped define the era and though it “sounds” very 1958, it still rocks out today.[1]

That is why just calling it a novelty song just seems wrong. Yes, it has a catchy hook, and funny lyrics, but the ones that we have discussed that fall under the novelty genre does not have any Rock and Roll feel to it. In fact, they aren’t even close.

The Coasters would also develop into a great live act, incorporating not just dance steps but comedic elements that fit the songs. This made them a must see on the concert circuit. Lieber famously called the music of the Coasters “a white kid’s view of a black person’s conception of white society” and whether that was right or wrong it perfectly straddled the line between contemporary Pop and R&B, before the gap was too wide for music to make that impossible.

This may have been the only number one mainstream hit for the Coasters, but they were far from done in regards to the charts. In 1959, they would have three top ten hits with “Charlie Brown” (#2), “Along Came Jones (#9) and Poison Ivy (#7), the latter of which went to the top of the R&B chart. They would still have minor hits in the early 1960’s, but that would be it for the Coasters, though they would endure a powerful legacy and would be inducted into the Rock and Roll Hall of Fame in 1987, the second ever class, fittingly as it was the same year that Jerry Lieber and Mike Stoller were inducted.

R&B stars, a great live act, a mainstream success, and three years of chart topping songs is not the resume a novelty song group, and thankfully that is not how most people perceive the Coasters.