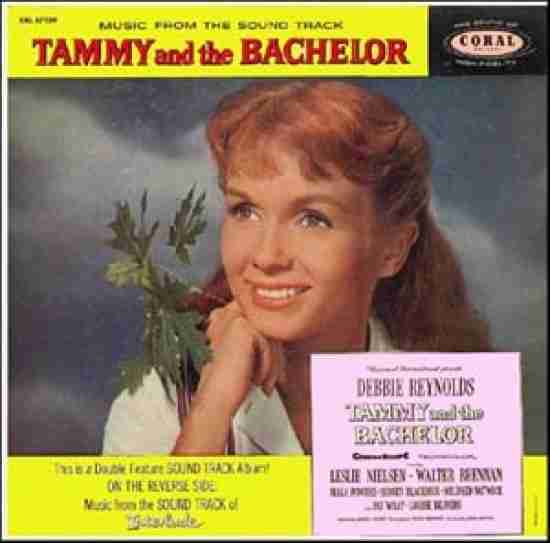 Guess which one I cared about more?[1]

Before I talk about Carrie Fisher’s mother, this was a case where I started to question the chart in which chose to write about. Now with the one I selected being an amalgamation of three important charts, and while it realistically SHOULD be the one discussed as Reynolds was at the top of Top 100 for a five week period, there were two songs that are considered today to be much bigger than “Tammy”, had a week at the top of Best Sellers in Stores chart during that time frame I would have loved to discuss.

The first was Paul Anka’s “Diana”, and as a fellow Canadian, I of course wanted to bring him into the equation. As it turns out, Anka will be talked about a little later, but I can’t say the same for the second, “That’ll be the Day” by Buddy Holly & The Crickets.

Who am I kidding? I am going to talk about them anyway!

In an eighteen-month time frame, Holly would generate what would become Rock and Roll classics, including “Peggy Sue”, “Oh Boy” and “Maybe Baby”, which all failed to top the charts. Holly was the man that gave us the Rock and Roll staple of two guitars, a bass and a drum set. He was one of the first Rock musicians that penned and performed his own music. Buddy Holly played faster than his peers, looked different than the other Rock stars of his era and as we all know he was taken from his far too soon at the tender age of 22 from a plane crash.[2]

For many, Holly is just as influential as Elvis or Chuck Berry and just as important in the construction of modern Rock and Roll. I think I have to again illustrate the point of this book that Buddy Holly only went number one for just one week and not on the amalgamated Pop Chart.

Doesn’t seem like that could possibly be true does it?

Going back to the fall of 1957, it was becoming very clear just how intertwined music, television and music had become. Music hadn’t yet splintered into the hundreds of genres we have now. There were no multiplexes, so you weren’t having multiple options for your movie going dollar. Television only had a few channels, and half of those programs were variety shows. Comparatively speaking, the 1950’s had barely a fraction of pop culture celebrities that we do today and when there was a star in one field, agents (and often the celebrities themselves) would be ushered in to try another. Since there were not many other alternatives back then, and since variety shows and movie musicals dominated television and music anyway, it was not that hard for many of these artists to segue into the other as many of them were already accomplished musicians and actors anyway, and even of they weren’t, they would be given the opportunity to try.

By 1957, Debbie Reynolds was an established movie star and already one half of a Hollywood power couple with her husband, Eddie Fisher. Five years earlier, she landed her first starring role, opposite Gene Kelly and Donald O’Connor in “Singin’ in the Rain”, where she not only held her own against the legends but also was a scene-stealer who could act, sing and dance; which was the “Three for Three” in early 1950’s entertainment.

She would continue to be a lead actress, many of which saw her perform in musicals. Some of her films did well, some didn’t but with her marriage to Fisher she was considered thorough most of the 50’s as Hollywood royalty and why not? She was young, she was beautiful, she was talented and she was connected.

This bring us to her 1957 film, Tammy and the Bachelor, where she played a seventeen year old simple country girl from Mississippi who while rummaging in the swamp (seriously) comes across a plane crash and the unconscious body of its pilot. Based on the name of this movie, I don’t really have to tell you how this movie played out do I?

The movie, while generic and predictable gave us two noteworthy items; The first was that the pilot was portrayed by Leslie Nielson, who would become so synonymous with Airplane and the Naked Gun films, that while it helped his career reach new heights, he was pigeonholed so much as a gag-a-minute actor that when you looked back at every dramatic role that he did in his first thirty years in acting, you don’t believe it anymore as you constantly wait on a pratfall that isn’t coming.

The second is that in the film, Reynolds sang “Tammy”, which would be nominated (but didn’t win) the Oscar for Best Original Song, but would ascend to the top position on the pop charts.

Unlike Tab Hunter, Reynolds was a very good singer, and though it really wasn’t a Rock song, it struck a chord with young girls who could empathize with the teen girl in love story, both in the film and showcased in song. As Reynolds was already a movie star, it wasn’t hard for a studio to get behind promoting it, and she would become the first female to go number one at both the box office and the modern pop charts.

Had Reynolds performed more music, it is conceivable that she could have had a more prolific music career, but she did crack the top forty a couple more times and would put out a full album in 1959, which was the same year that if there was TMZ, she would have been all over, as her husband famously left her for Elizabeth Taylor, an event that actually made her bigger at the time as she was a sympathetic figure in nearly the exact same way that Jennifer Aniston was when Brad Pitt left her for Angelina Jolie.[3]

Although Reynolds would not achieve heights in her music career again, she would earn in 1964 her first and only Academy Award nomination in “The Unsinkable Molly Brown” and she was able to commandeer significant money per picture, that was until the 1966’s “The Singing Nun” was a flop, leading to a few other flops and essentially ending her movie career and seeing as Vegas nightclub act in the 1970’s, a large drop from the Hollywood royalty that she once was.[4]

Still, it is hard to feel too bad for someone who had as good a run as she had a very successful movie career and her lone number one hit song was not an anomaly that it would initially appear to be. Believe me, we have some those anomalies coming!

[1] Yes I am a Star Wars geek. Big shock right?
[2] This was the infamous crash that also killed Ritchie Valens and The Big Bopper, known in Rock circles as “The Day The Music Died”.
[3] For what it is worth (which is nothing) I too what have picked Elizabeth Taylor over Debbie Reynolds and Angelina Jolie over Jennifer Aniston)
[4] Automatically, you would think that any movie about a nun that sings is going to be a bomb, but a year before Julie Andrews played a nun in the very successful musical, the Sound of Music. I guess nuns who sang were considered a sure thing in 1966. By the way, I have a singing nun to speak about in great depth later.
Tagged under
Tweet

More in this category: « Teddy Bear Wake Up Little Susie »