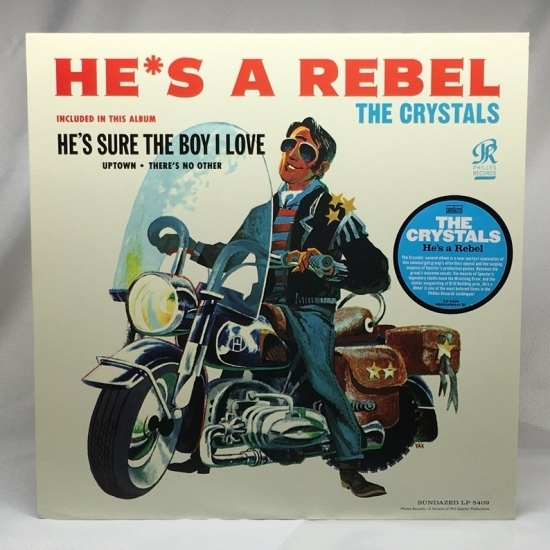 Grab an alcoholic beverage from the fridge.  This one is going to take a while to get through, and a lot of the players we already spoke of will be making return appearances as we decipher a hit song by an influential group that had nothing to do with its recording.

Confused?  You still will be after this chapter is done.

Girl groups were on the rise, and so was the mad genius, Phil Spector who had just started his own label, Phillies Records.  Spector signed the then quintet from New York City and wrote and produced their first hit, “There’s No Other Like My Baby”, a song that went to #20 on the Hot 100 and to #5 on the R&B chart in early ’62.  They would have another top twenty hit a few months later with “Uptown”, but their next single would be the flop that Carole King and Gerry Goffin wrote about Little Eva’s domestic issues, “He Hit Me (It Felt Like a Kiss).

Now this may have been 1962 and domestic violence was far from the hot button topic it is today, but not even Spector’s bolero like arrangement could mask what was lyrically a song about a woman accepting her boyfriend beating the crap out of her.  Radio didn’t want to play it, and the Crystals really didn’t want to sing it, and this was one of Spector’s rare early 60’s error in reading America’s musical pulse.[1]

This is where it gets complicated and I will again use the sentence, “Here’s what we do know” as stories tend to very.

Roughly around the same time as the Crystals ascended to success, Spector was working with another group called the Blossoms, whose lead singer was Darlene Love, the owner of one of the most powerful voices of her generation, and while she did achieve a bit of commercial success and would later receive her due by the Rock and Roll community with an induction into the Rock and Roll Hall of Fame in 2010, but still this is a woman who should be revered as rock and roll royalty and not just as Danny Glover’s wife in Lethal Weapon.  I can’t tell you how much of a shame it is that the biggest hit of her career didn’t have her name attached to it.

This is a shame for Love, but what of the actual members of the Crystals?

Spector did not use them because this was some sort of a Milli Vanilli situation, though the actual specifics aren’t completely clear.  Specifically (and here is what we do know!) is that Spector owned the name of the Crystals and in theory could record cows mooing and attribute it to the group.  Spector was working with the Darlene Love and the Blossoms and wanted to capitalize on recording the Gene Pitney written song, “He’s A Rebel” prior to Vicki Carr’s release for a rival label.

Now based on the stories that have been written, either (or any combination of the following) is true:

The Crystals were not available as they were in New York as opposed to Los Angeles where Spector’s studio was based.

Spector believed that Love could hit the notes required than the members of the Crystals who in 1962 had an established name.

Spector tired of the rotating lead singers and infighting within the group.

Spector was an asshole that didn’t mind screwing over both the Blossoms and the Crystals as long as his own personal gain (and his view of the music) persevered.[2]

Forgetting how we got to the song, here is the result.  “He’s A Rebel” was a major hit that spoke to how women may have wanted their men to be.  Actually, who are we kidding?  Women like bad boys, and this was a song that acknowledged that fact.[3]  It wasn’t even a case where the woman tried to change him and accepted that he would “never be any good”, at least in terms of societal standards anyway.  The rebelliousness was the attraction.

Getting back to the actual Crystals, it would not be until later in the year when they would record again, though now they were a quartet as one of the members left for another group, the far less successful group, The Butterflys.  1963 would see them hit the Top Ten twice, first with “Da Doo Ron Ron” and then with “And Then Kissed Me”, which would later be used perfectly in a scene in Goodfellas when we first saw the Copa.  Those last two songs were huge in terms of rock and roll history, but this would be it for the Crystals, regardless of who was actually singing the recordings.

Tensions remained within the group and towards Spector himself.   The Crystals had issues with the Ronettes, feeling that Phil was now favoring them, which since he would later marry the lead singer Ronnie Bennett, was a fairly accurate assumption.  Hell, after what took place before, the Crystals had every reason not to want to work with Spector ever again, but since they he owned their name and they were not exactly blessed with a lot of options, the situation at work wasn’t great.

The Crystals would never have a hit again, though after they released from Phillies Records and went to Imperial it was thought they would have a shot with their new label, Imperial, but nothing of note came out of their time there.  They would disband in 1966 only to reunite in various incarnations for the oldies circuit and their muddled history is probably what keeps a group like this out of the Rock and Roll Hall of Fame.

[1] Lead singer, Barbara Alston would later go on record saying that is was “positively one record that none of us liked”.

[2] Is it safe to say that Spector was half genius/half asshole?  I always thought of myself as half alcoholic/half asshole.

[3] I just had a flashback from my youth that reminded me why I struggled to date back then as I was far from a bad boy.  Actually, that was just the tip of my undatable iceberg.