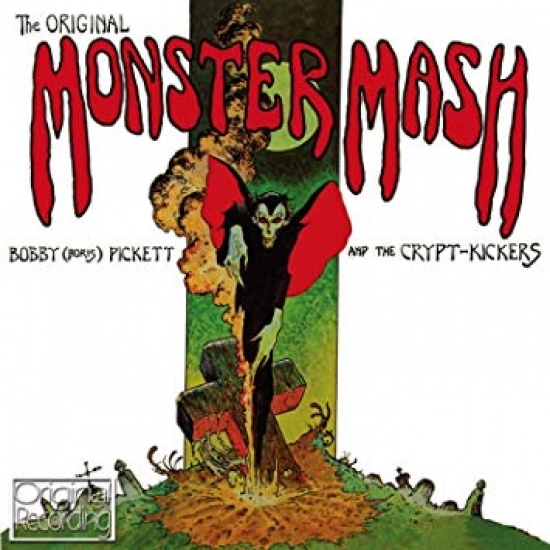 As you may have deduced, novelty songs aren’t exactly my thing.  A song that is funny and is only two minutes in duration can get old pretty fast as far more often than not the punchline can’t possibly evoke the same guffaw the tenth time you hear it.  Still, a novelty song if it has a catchy beat or some type of hook can extend the life of a tune, and even though the song may eventually sound dated, the joke/hook can work year after year.  This is definitely the case for Bobby “Boris” Pickett’s lone hit, “Monster Mash”, a song that appropriately went number one on Halloween of 1962.

A Korean War veteran from Massachusetts, Bobby Pickett would join a group called the Cordials and while performing would utilize his impression of Boris Karloff, the actor who portrayed Frankenstein multiple times and was a horror movie icon for decades.  After perfecting his Karloff impression, Pickett would write “Monster Mash”, a spoof of the dance crazes that had swept the Western world and combined it with a craze that had been around for decades, movie monsters.

It was a brilliant combination of current pop culture (dance craze) and enduring pop culture (movie monsters) and was told from the perspective of what is presumably a mad scientist whose creation awoke to do a dance, but not just any dance…The Monster Mash, which “caught on in a flash” and was the hit amongst all the monsters and ghouls in the vicinity.  The who’s who of monsters included Dracula, the Wolfman, Igor and assorted zombies, though Dracula did bemoan that his “Transylvania Twist” was no longer in fashion.

This would be Pickett’s only hit, and while he is the literal definition of a one hit wonder (unlike so many perceived ones that was already mentioned), it was an enduring one that rules the Halloween roost.  Not only is this the only Halloween number one song, this is basically the only Halloween hit period…well it is depending on your point of view as I feel another one of my tangents coming on.

While many other songs could conceivably have an October 31st theme, nothing fits the theme of the day better than “Monster Mash”, though I could conceivable come up with a dream compilation album that fits the day.  In fact, I think I will do just that.

My twenty songs (let’s remember I come from the era of the compact disc, so I will cap it at what seems like an accurate number for a disc) are as follows:[1]

Track 1: “Monster Mash” kicks it off because frankly it has to!

Track 3: “I Put A Spell on You” by “Screamin” Jay Hawkins.  While the song isn’t exactly part of the Halloween canon, Hawkins certainly is.  He was the first true shock rocker (sorry Alice Cooper), and that is one hell of a haunting song.

Track 4: “The Theme from the Halloween Movie” by John Carpenter.  This is easily the simplest, yet most effective of the horror movie themes form the 70’s and 80’s.

Track 5: “Don’t Fear the Reaper” by The Blue Oyster Cult.  Did I mention that I had a girlfriend who thought this was a made up song from the Cowbell Sketch on Saturday Night Live?[2]

Track 6: “The Time Warp” from the Rocky Horror Picture Show.  This was for many the ultimate Halloween film though as for dressing up to see it, that is something I never had any interest in doing.

Track 7: “Everyday is Halloween” by Ministry.  I know this is not exactly a Halloween song despite the title but I need some early industrial in my mix.

Track 8: “The Twilight Zone Theme”.  If there is any television series worth a Halloween marathon it is this one.  Actually, you can do that any time of the year and it always works.

Track 9: “The Munsters Theme”.  Let’s follow the last one with something fun shall we?

Track 10: “Tubular Bells” by Mike Oldfield.  The second horror movie soundtrack (this one from the Exorcist) but this was about as creepy as it came.

Track 11: “The Devil Went Down to Georgia” by the Charlie Daniels Band.  The devil should make an appearance on Halloween right?  Why not Daniels rapid fiddle that sounded like Lucifer was carousing the bow?

Track 12: “Rhiannon” by Fleetwood Mac.  If Stevie Nicks is really a witch, why not a song where she sings (allegedly) about the Welsh goddess of the same name.[3]

Track 13: “Somebody’s Watching Me” by Rockwell.  Berry Gordy’s son has no business singing, which is why he spoke in a pseudo-constipated voice, and had Michael Jackson singing the chorus, but this a great song about paranoia and one to listen to after you watched that scary movie or anything by Alfred Hitchcock.

Track 14: “People are Strange” by The Doors.  Granted the cover version by Echo and the Bunnymen in The Lost Boys put it in the horror realm, but the best version is Jim Morrison of course!

Track 15: “Werewolves of London” by Warren Zevon.  Come on!  Werewolves!  London, England!  This is a no-brainer!

Track 16: “Blood: Gangrel’s Theme” by Jim Johnston.  This will only mean something to those who follow the WWE, but the Cole’s Notes version is that Gangrel (the wrestler) had a gimmick where he was a vampire and for a wrestler who never made it close to the main event, he had an awesome ring entrance song.

Track 17: “Blood on the Snow” by Coven.  This was an early 70’s band that was into Satan (seriously) and features one hell of a guitar solo.[4]

Track 18: “Dead Babies” by Alice Cooper.  You have to have Alice on it, and why not a song where he would actually decapitate baby dolls on stage?

Track 19: “Evil Grows” by the Poppy Family.  You probably are not aware of this song or this group, but it was a hit in Canada in the early 70’s, and though they look pretty square, the fuzz guitar and creepy undertones makes this work.[5]

Track 20: “Red Right Hand” by Nick Cave and the Bad Seeds.  Used in the Scream trilogy and a nice haunting way to end the disc.[6]

I almost included John Lennon’s “Give Peace a Chance” if for no other reason my wife and I always talk about going out as John and Yoko for Halloween, but it doesn’t fit does it?

Say what we want about all of the songs about my non-existent compact disc or any of your Halloween favorites but it is Boris Pickett’s hit song that will probably still enjoy the biggest late October spike in popularity one hundred years from now.

Of course, it is pretty easy to make a declaration like that when I know that I won’t be alive then to be proven wrong.

[1] I could actually do the math as the maximum minutes on a CD is 78 minutes, but I have no interest in actually figuring out how many songs I could really fit.

[2] I did already, didn’t I?  I also shared too much last time I mentioned it.

[3] I will say this.  Nicks’ appearance performing this very song on American Horror Story: Coven was perfect for enhancing the rumor or poking fun at it.  I find the image of Nicks as a practicing wiccan so natural, don’t you?

[4] The band would be credited with one hit (only the lead singer actually recorded it) with “One Tin Soldier” from the film Billy Jack.  That song was a polar opposite of everything else that Coven ever did.

[5] Terry Jacks was in this band.  This was the clown who gave us “Seasons in the Sun”, where he singing his farewells to his family as he is dying.  Jacks was a pretty morbid guy, though nobody seemed to notice at the time.

[6] Ten years from now, will anyone under the age of 30 know what a compact disc is?

More in this category: « Sherry He's a Rebel »