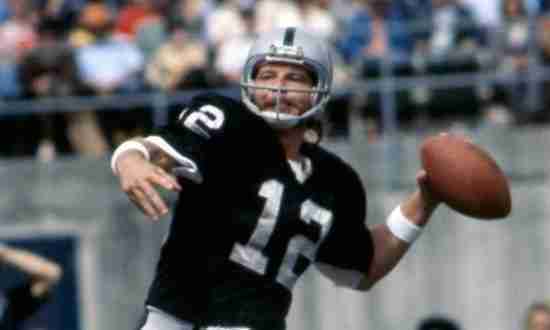 Chairman:  How long has Ken Stabler been thought of for the Pro Football Hall of Fame?

Stabler passed away recently, and for years there have been many campaigns to get him inducted.  I understand it, as Stabler had a star presence to him and while he was not necessarily the best Quarterback in the 1970’s, or maybe not even top five, but he was the perfect fit for the Oakland Raiders and a lot of that team’s success was due to his play.

Straight up, I knew this was going to be his year as almost every Senior Nominee over the past five years have gotten in.  The only thing I worried about was would they induct two Quarterbacks, as Favre was a lock.

Brett Favvv-ruh was getting in no matter what. But I never thought his candidacy had any effect on Stabler. Just like Ray Guy went through the whole process, but needed an up or down vote to actually get in. Stabler probably needed the same situation. Even though he is 56th in passing yards, behind such luminaries as Jon Kitna, Jake Plummer, and Chris Chandler, his election this year is not much of a surprise.

Chairman: Sentiment probably didn’t hurt either.  As for his passing yards, I would like to think that the inflated numbers of the eras that followed puts a proper perspective on that era, and the decision makers know this (I presume), though I have seen quite a few people on our Stabler page point at those stats without putting the era into proper context.

Speaking of Kitna, could you see him in the Backup QB HOF?  Somewhere there should be a bust of him in between to Frank Reich and Jim Zorn.

Spheniscus: How dare you have a Backup QB HOF and not include Steve DeBerg! He is a first ballot, unanimous inductee. Also the player you wanted as your QB for three years because he was going to be replaced by someone a lot better: Montana in San Fran, followed by Elway in Denver, and then Testaverde in Tampa. No one kept the seat warm quite like Steve DeBerg. Plus he is still the oldest QB ever to start a game when at 44, after having been retired for five years, he led the Falcons offense to a glorious 3 points against Vinny Testaverde’s New York Jets.

But back to the Snake. Those Raiders teams were legendary and although the presence of the Steelers dynasty limited their overall number of championships, the election of their leader on offense is certainly not surprising. It is just too bad that he isn’t here to enjoy the enshrinement.
Last modified on Saturday, 03 December 2016 17:53
Tagged under
Tweet