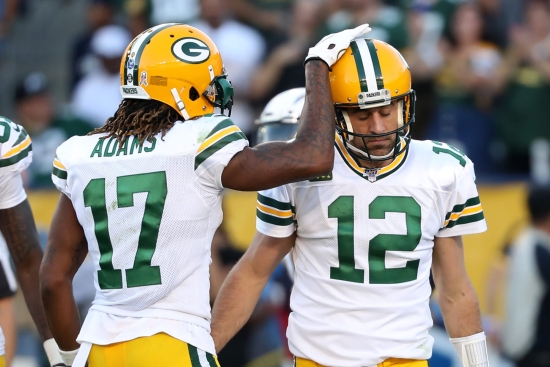 Aaron Rodgers isn’t a man who holds back, and it’s perhaps why he’s so evident in the public eye, perhaps more so than anyone else in the NFL. When the Green Bay Packers star talks, there’s always a microphone ready to amplify his message. The veteran quarterback can also be viciously amusing, and it’s clear that he has the respect of his team-mates, both past, and present.

In a light-hearted interview, Rodgers echoed previous comments made by Davante Adams when he responded to the return of Allen Lazard after he missed off-season duty as a way to force the issue on a new contract, the 38-year-old joked;

This was a direct response to Adams discussing now working with Derek Carr at the Las Vegas Raiders, having previously had the pleasure of receiving passes from Rodgers for the best part of eight years.

Rodgers is always ready to put himself into the action and to be fair, he is a big part of Green Bay and is pretty much the unofficial spokesman for a team he has represented with honor for 17 seasons.

Over the past three seasons, he’s put in an awesome showing, helping the Packers to 39-6 in regular season action. He will be pushing to get the Packers further into the post-season this time around, and the chances of him doing so are as good as you might get with the best casino bonuses, or parhaat kasinobonukset as the Finnish call it.

It’s now 12 years since Rodgers picked up his sole Super Bowl championship and arguably a second, if well overdue. You can’t fault the efforts of the outspoken QB; he has, after all, been named the NFL MVP for two seasons in a row and four times in total.

The departure of Adams may harm such hopes, and the connection that Rodgers had with the 29-year-old wide receiver was palpable. This didn’t stop him from turning down a new Packers deal and instead took a five-year offer from the Raiders said to be worth over $141 million.

The reasons for the move were not just financial as Adams was keen to connect again with Carr, who was a college team-mate back in Fresno State.

Now Rodgers needs Lazard to step up, and the 26-year-old certainly upped his game in 2021, collecting eight touchdown passes, a total that was more than his previous two completed seasons combined.

Aaron Rodgers turned up for training camp in an outfit that was instantly compared to that worn by Nicolas Cage in Con-Air, and while such a move is classic Rodgers behavior, it’s always important to remember, if it was not already abundantly clear, that while the 10-time Pro Bowl pick is always ready to crack a joke (even at his own expense), there are few NFL players that take the game as seriously as Aaron Rodgers.

More in this category: « The unlikely hero in a FIFA World Cup playoff Two of the next Hall of Fame pitchers »