Awards - HOF? Part Sixty-Four The ABA Rookie of the Year 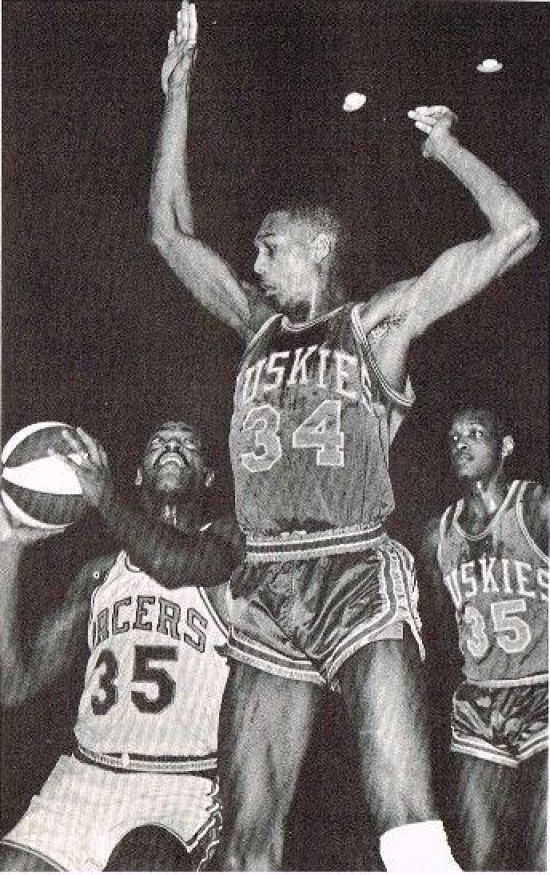 The trophy was awarded every year of the league’s existence, beginning in 1968 and concluding in 1976.

How many ABA Rookies of the Year made the Naismith Basketball Hall of Fame?

The following are the past players who have won the ABA Rookie of the Year who are eligible for the Naismith Basketball Hall of Fame and have been enshrined.

Mel Daniels was drafted by the Cincinnati Royals (9th Overall), but he opted for the higher salary of the Minnesota Muskies.  As a rookie, Daniels led Minnesota to the Finals where they lost to Pittsburgh, and he began a streak of seven All-Star Games.  The Muskies were struggling financially, and moved to Florida, but not with Daniels who they traded to Indiana.  As a Pacer, Daniels won two MVPs and three ABA Titles

Opting to turn pro after his sophomore year in college, Spencer Haywood’s only option was the ABA, as the NBA then had a rule that a player could not turn professional until his class graduated.  Haywood then played one year with Denver of the ABA, winning both the MVP and Rookie of the Year, becoming the only player to do so.  He also led the league in Minutes and Rebounds and Points per Game.  Following this season, Haywood joined the NBA with Seattle, and successfully challenged to join the league in a case that went to the Supreme Court.  Haywood later would be a four-time NBA All-Star, and won an NBA Title with the Lakers.

Charlie Scott signed with the Virginia Squires before the NBA Draft, hence why he fell to the Seventh Round, where he was chosen by the Celtics.  Scott was an ABA All-Star this year, and an All-ABA Selection, and was so the year after although he did not complete his second season.  He bolted for the NBA for Phoenix, who traded for his rights.  Scott was a three-time NBA All-Star, and would later be an NBA Champion when he was with Boston in 1976.

Issel led the ABA in Points per Game, and it was the second highest of his career.  An All-Star as a rookie, Issel was an All-Star through the end of the ABA and was so again when the leagues merged, giving him seven in total.  He was a five-time All-ABA Selection.

Gilmore also won the ABA MVP, and remained with Kentucky for the remainder of the ABA’s existence.  Following the dissolution of the Colonels, Gilmore played for the Bulls, Spurs and Celtics, with the Center appearing in 11 total All-Star Games.

Taken number one by the Atlanta Hawks, David Thompson instead opted to play for Denver of the ABA, in what would be the last year of the ABA.  An All-Star this year, Thompson remained with the Nuggets when the leagues merged.  He would later go to four more All-Star Games in the NBA, three with Denver and one with Seattle.

The following are the players who have won the ABA Rookie of the Year who are eligible for the Naismith Basketball Hall of Fame and have not been selected:

Jabali was a Fourth Round Pick from Wichita State, but instead he opted to go to Oakland od the ABA.  The Shooting Guard helped Oakland with the Title that year, and he would later be a four-time ABA All-Star, competing his entire pro career in the upstart league.  He also played for Washington, Indiana, Florida, Denver and San Diego.

With all due respect the Taylor, this was the weakest Rookie of the Year in ABA history, but he would go on to be a two-time ABA All-Star and two-time ABA Champion with New York.  He would later play in the NBA in Kansas City, Denver and San Diego.

A two-time NCAA Champion at UCLA, Nater chose the ABA over the Milwaukee Bucks, who took him 18th Overall.  Nater was first drafted in the ABA in 1972 by the Miami Floridians, but when they folded, Virginia took him in the Dispersal Draft.  As good as he was, the Squires traded him for a draft pick and $300,000 to San Antonio 17 Games into his rookie year.  He led the ABA in Field Goal Percentage, and was the ABA Rebounding leader as a sophomore.  Nater, would later win an NBA Rebounding Title as a member of the San Diego Clippers in 1978/79.

Selected second overall by the 76ers, Providence’s Marvin Barnes instead opted to sign with St. Louis, where he was an All-Star in both of his seasons in the league.  When the ABA merged with the NBA, St. Louis was disbanded, and he joined the Detroit Pistons, but was not as successful in the NBA.  He would also play a year each in Buffalo, Boston and San Diego.

The following are the players who have won the ABA Rookie of the Year who have retired but have not met the mandatory years out of the game to qualify for the Naismith Basketball Hall of Fame:

The following are the past players who have won the ABA Rookie of the Year are eligible for the Naismith Basketball Hall of Fame and are still active.

Nothing will change in this going forward as none of the ABA Rookies of the Year who have not been inducted feel like they have Hall of Fame potential.  As this is now a defunct category, this feels like more than a footnote going forward.

We stay with the ABA, and look at their past ABA All-Star Game MVPs.

More in this category: « Online Sports Betting Sites: Are Their Prices Inelastic? The Greatest Athletes from Philadelphia »