How Will LSU & Clemson Cope as Top Picks Go Pro? 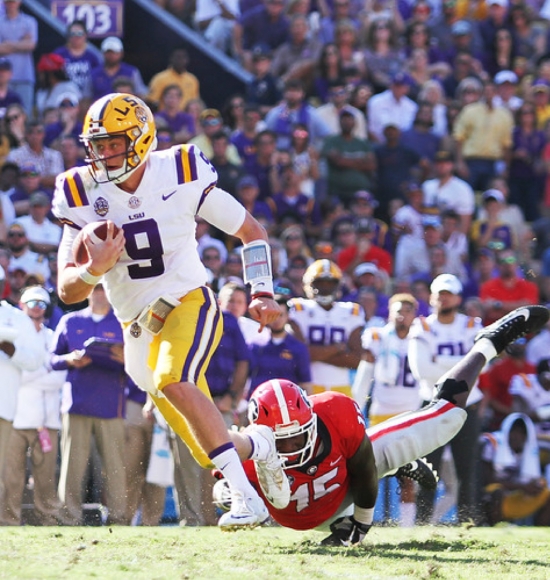 How Will LSU & Clemson Cope as Top Picks Go Pro?

After an intriguing battle at the Mercedes-Benz Superdome in New Orleans,LSU overcame a strong challenge from Clemsonto win the collegiate National Championship, 42-25.

With five or more of those players expected to be snapped up in the first round of the 2020 NFL Draft, we take a look at the two best prospects and how their current teams might fare without them.

LSU’s Joe Burrow is the first name on the list for good reason. The quarterback’s performance on January 14, confirmed his status as likely first pick overall in April’s draft. He recorded the most passing touchdowns in a season (passing Hawaii's Colt Brennan) and finished the season with 402 of 527 (76.3%) for 5,671 yards. He recorded 60 passing touchdowns, six interceptions and five rushing touchdowns.

Hailed by many as the best ever college quarterback, the 23-year-old could be the first name called in April with mock drafts projecting a move to the Cincinnati Bengals. Myles Brennan has been tasked with replacing the Heisman Trophy winner once the season is over. The highly-rated New Orleans native suddenly finds himself with big shoes to fill but his trajectory has set him up well and he has also bulked up over the last seasons and looks in good physical shape.

Clemson is resigned to losing linebacker (amongst other positions) Isaiah Simmons. The 21-year-old posted some impressive stats (102 tackles, 16 tackles for loss, eight sacks, three interceptions, eight broken up passes and a forced fumble) and has been linked with the Giants in the mock drafts. He is expected to be a top-10 pick and could even make the top-three.

Losing such a versatile defender is never easy and Clemson will have their work cut out selecting a suitable replacement. At first glance, their defense will be notably weaker as players like Simmons don’t come along too often but Clemson has a history of finding a way to compete. We will have to wait to see who they recruit to fill the 21-year-old's shoes.

Thanks to their recent consistency, having appeared in four of the last five finals, Clemson remains the early favorite in the American football betting oddsto win next year’s championship. Also, in the running are Ohio State, Alabama and 2020 winners LSU.

Burrow and all but one of the Heisman Trophy finalistswill be leaving college this season.  The exception is Ohio State quarterback Justin Fields, who has been announced as favorite to claim the award at the end of the 2020 campaign. He finished third in the 2019 voting behind winner Burrow and runner-up, Oklahoma quarterback Jalen Hurts. The Buckeyes reached the playoff semifinals where they lost 29-23 to Clemson.

Also in contention is Trevor Lawrence, who lost the first game of his college career in the Championship final against LSU. Lawrence had previously led Clemson to a national title and will be keen to bounce back stronger before heading the NFL Draft in 2021 where he has been tipped to be No. 1 overall pick. If he can lead the Tigers to a third-straight National Championship game he could also finish the campaign as a Heisman Trophy winner.