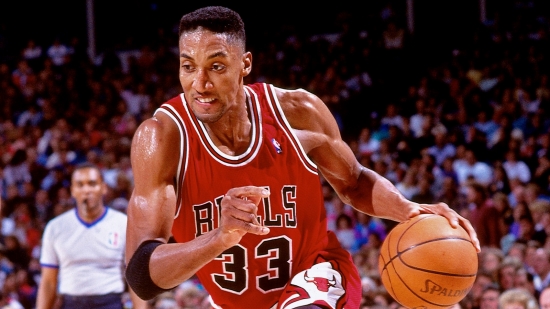 Choosing Michael Jordan as the greatest Chicago Bull of all-time was the easiest decision we have ever made.  It was almost as easy to anoint Scottie Pippen as number two.

The Bulls coveted Pippen in the 1987 Draft, and they made a draft day deal with the Seattle SuperSonics to get him. Pippen was the perfect player to compliment Michael Jordan.  Like M.J., Pippen paid equal attention to the defensive side of the ball while contributing where needed on offense.  As part of Phil Jackson's triangle offense, Pippen could carry the offensive load if required, but he was at his best working in tandem as Jordan's second banana.

Maybe “second banana” isn’t the right term for Pippen.  While Pippen couldn’t win the title without Jordan, would Jordan have won six titles without Pippen?  Not a chance.

Pippen was a seven-time All-Star and a seven-time All-NBA Selection.  Pippen's defensive skills were so good that he had none First Team All-Defensive Selections, and he was the league-leader in Steals (1994-95).

When Jordan retired in 1998, the Bulls went into rebuilding mode, and Pippen was traded to the Houston Rockets. He returned for a farewell year in 2003-04.

Pippen averaged 17.7 Points per Game with the Bulls with four 20-plus years.