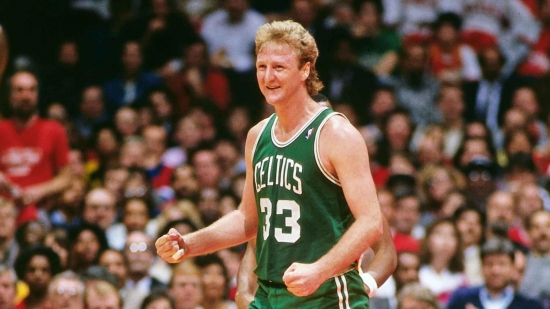 While we said that anointing Bill Russell was a lock as our top Boston Celtic of all-time, Larry Bird gave us pause.

Before Bird's arrival to Boston, the franchise was in disarray after being without question the most dominant franchise in the league.  The city craved basketball greatness, and Bird gave them just that.  Bird was the 6th overall pick in 1978 but joined a year later after staying at Indiana State for his senior year.  As expected, Bird was an automatic superstar winning the Rookie of the Year and being named to his first of what would be 12 All-Star Games.

Larry could do everything.  He was a scorer and an accurate one at that.  He averaged 24.3 Points per Game over his career and was the runner-up for the scoring title in 1984-85.  He was a phenomenal rebounder who over his career averaged an even ten boards per game.  He could play the Point Forward and guard his man expertly.  Four times, Bird led the NBA in Defensive Win Shares, and he was a three-time Second Team All-Defensive Selection.   Bird’s game was so complete that he would win the NBA Most Valuable Player three years in a row from the 1983-84 season to the 1985-86).

More importantly, he won!  As the leader of the Celtics, they would win the NBA Championship three times in the 1980s (1981, 1984 & 1986), which is the dynasty that most remember.  Even when his athleticism declined (and he wasn’t often the best athlete on the court), he had unequalled basketball knowledge that allowed him to be a step ahead of his opponents, even when he seemed to be a step slower than them.  Had back issues not held his career back, he could have possibly brought them another title, but what he did for the Celtics will always be remembered.

Bird would be inducted into the Naismith Basketball Hall of Fame in 1998.