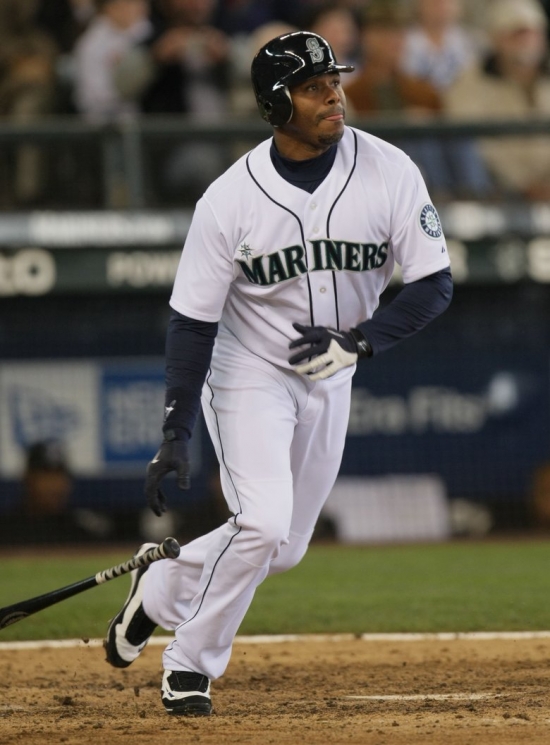 Drafted first overall in the 1987 Amateur Draft, Griffey would debut as a teenager in 1989, where he had a sweet rookie year, with 120 Hits and 16 Home Runs.  That was a good start, but that was just the beginning of what would be one of the most exceptional baseball careers of all-time.

The 1990s were Ken Griffey Jr's decade.  He played for the Mariners throughout that 10-year period, where he was always named to the All-Star team.  He was a true five-tool player.  "The Kid" hit for average, as shown by his seven .300 Seasons.  He hit for power.  On four occasions, he would lead the American League in Home Runs and would have six 40 dinger seasons.  He had seven 100 RBI seasons, and from 1996 to 1999, he never drove in less than 134 runners.  All of that would gain him seven Silver Sluggers.  He was a smart base-runner and would have 167 Stolen Bases for the team.  Griffey had an excellent outfield arm, and he was a good fielder who would win the Gold Glove 10 times.

His best season was in 1997, where that year he would win the American League MVP with league-leading 125 Runs, 56 Home Runs, 147 Runs Batted In, and a .646 Slugging Percentage.  He would also finish in the top ten in MVP voting six other times, and a case could be made that throughout the 1990s, he was the most popular player in baseball, and if he wasn't, he was close.

While he had a great run in Seattle, he desired to return home to Cincinnati, and a trade was engineered to help facilitate that.  While the Mariners did not get any superstar of his ilk in return, Griffey began to decline after his first year with the Reds.  He would return to his second home of Seattle in 2009 for his final two years before retiring after 2010.

Griffey would enter the Baseball Hall of Fame in his first year of eligibility in 2016, where he received 99.3% of the vote.  We have to wonder what voters who didn’t check his name off felt he was lacking.

You can look at others like Ichiro Suzuki or Edgar Martinez for this top spot, and we did.  However, when it was all said and done, nobody for this team was this great for this long.  As of this writing, Ken Griffey Jr. is the all-time franchise leader in bWAR (70.6) and Home Runs (417), and he owns a Slash Line of .292/.374/.553.

More in this category: 2. Edgar Martinez »