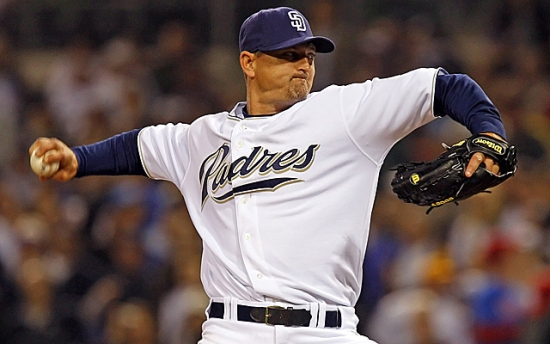 The San Diego Padres raised concerns in the summer of 1993 when they traded Gary Sheffield to Florida, but one of the players they received in return was Trevor Hoffman, a rookie reliever who would become the best Relief Pitcher in National League history.

Hoffman would become their closer the following year, and he would soon prove himself as a dominating presence.  He would enter the game to the ominous opening of AC/DC's "Hells Bells," and in 1998, he led the NL in Saves (53) and took the Padres to the World Series.  They fell to the Yankees, but they would have never have gotten there without Hoffman.

Hoffman continued to be the top closer in the NL, with another league-lead in Saves in 2006 and nine 40-Save seasons.  He was the first player in baseball history to reach 500 Saves and 600 Saves (though he was with Milwaukee at the time), and he accrued 552 of his 601 Saves as a Padre.

San Diego retired his number 51 in 2011 and inducted Hoffman to their franchise Hall of Fame three years later.  In 2018, Cooperstown came calling, inducting Hoffman in the third year of his eligibility.  Appropriately, the player considered the best reliever in the NL now wins the Trevor Hoffman Award.