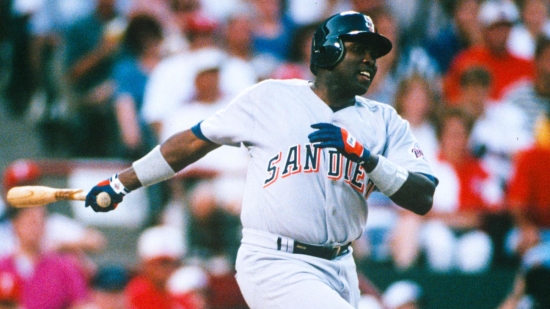 Sometimes, when we do our top 50 in a franchise, it is challenging to determine the man who tops the list.  This is not one of those times.

Tony Gwynn is not only the greatest San Diego Padre ever; he is one of the best hitters the game ever saw.  Gwynn's dedication to plate discipline and studying film would become a template for others to follow, and it yielded a bounty of hits.

Gwynn debuted for San Diego in 1982, and two years later, he was the Padres' regular Rightfielder and firmly established as one of the National League's premier hitters.  Gwynn helped lead San Diego to the pennant in 1984, and that year he won the Batting Title (.351), led the NL in Hits (213), and was an All-Star and Silver Slugger.

Gwynn’s 1984 would become par for the course for him over the next 15 years.  With the exception of his first year in 1982, Gwynn never had a year where he batted less than .300, and he won eight Batting Titles, including a .394 year in 1994, in the strike-halted season where he could have potentially batted .400.  He would finish first in Hits seven times, win the OBP title once, was a 15-time All-Star, and a seven-time Silver Slugger.  The MVP might have elided Gwynn, but he had seven top-ten finishes.

The power game of Gwynn was not his strength, but it was not a weakness either.  Gwynn smashed a respectable 135 Home Runs and had a lifetime Slugging Percentage of .459.  While he would later struggle with weight, Gwynn still swiped 319 Bases and was good defensively, accumulating five Gold Gloves.

Gwynn would amass 3,141 Hits with a .338 Batting Average over a 20-year career.  The Baseball Hall of Fame called him in his first year of eligibility in 2007.  As for the Padres, they inducted Gwynn into their Hall of Fame and retired his number 19 in 2004.

More in this category: 2. Trevor Hoffman »