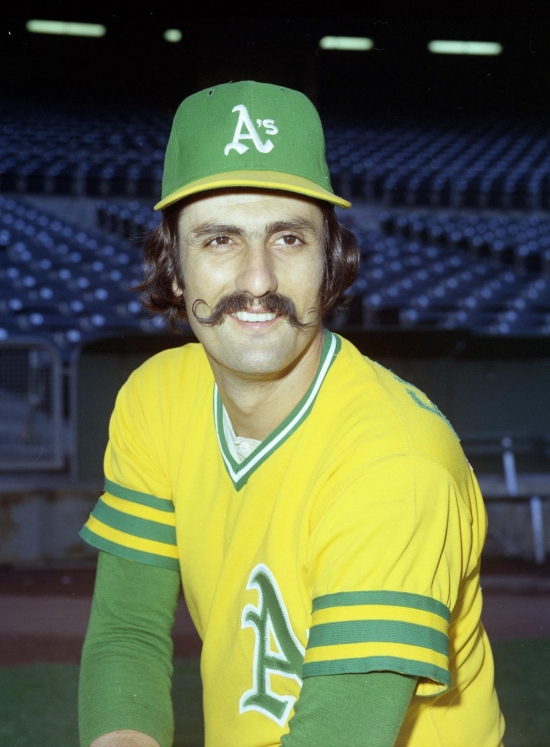 While the role of the relief pitcher was nothing new by the late 60s, but when Rollie Fingers emerged as Oakland’s closer, he was one of the first of his kind to be considered a superstar.  Fingers was a starter through most of his minor league career, and when he debuted with Oakland in 1968, he was moved mostly to the bullpen.  By 1971, this was his official role, and it was one that he was born to play.

The man with the signature handlebar mustache (initially grown at the urging of A's owner, Charlie Finlay), Fingers would have at least 17 or more Saves each season with Oakland from 1971 to 1976, mostly used in more extended relief than what is typically done today.  He went to his first All-Star Game in 1973 and went to the next three while playing in Oakland, and his role was integral in the Oakland dynasty that won three World Series in the 1970s.   As an Athletic, he would record 8 Saves in the playoffs, and he would be named the 1974 World Series MVP.

After that mini-dynasty, Fingers continued to be one of the best closers in baseball.  He finished third in Cy Young voting in 1975 and was eighth in 1976.  That latter year was very interesting, as he and Joe Rudi were sold to Boston in June as part of Oakland's fire sale.  They were both returned three days later, but Fingers was a Free Agent after season's end, and he signed with the San Diego Padres.

He would later win the Cy Young and MVP in 1981 as a member of the Milwaukee Brewers.

Fingers would be elected to the Baseball Hall of Fame in 1992.