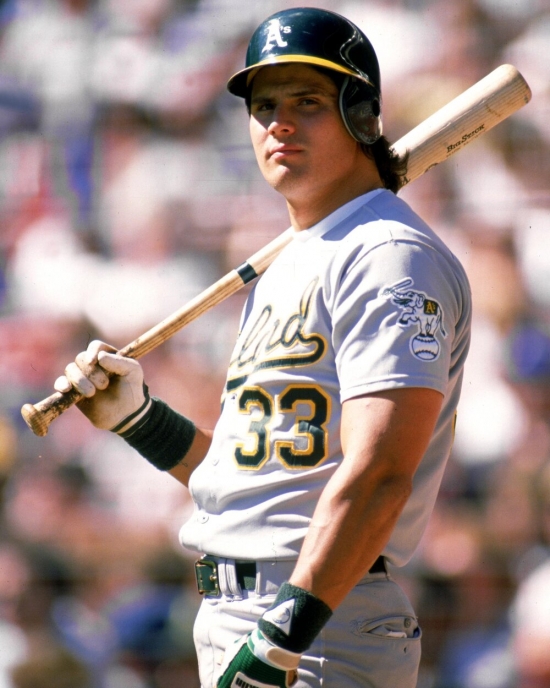 Let’s forget about some of the things that made Jose Canseco famous (or infamous).  The steroid use.  The admission of steroid use.  Throwing other players under the bus by (accusing) discussing their steroid use.  The boxing.  Madonna.  The baseball that bounced off his head for a Home Run.

What is also true is that in the late 80s, Jose Canseco was among the most famous athletes in sports and offensively was an elite baseball player.

1988 was Canseco's MVP season, and for the first time, he would win the Home Run Title (42), RBI Title (124), and Slugging Title (.569).  He raised his Batting Average from the year before by .50 points and posting an On Base Percentage of .391.  He would also become the first player to collect 40 Home Runs and steal 40 bases in a season.  That year, he would also help take the A’s to the first of three straight American League pennants, with Oakland winning it all in 1989.

He would suffer injuries through much of 1989 and rebound well in 1990 with a 37 Home Run and 101 RBI year.  1991 was another great season, as he had 44 taters to win his second Home Run title, and he had 122 Runs Batted In while finishing fourth in MVP voting.

With Oakland leading the AL West by over six games in 1992, he was traded shockingly to the Texas Rangers on August 31.  Oakland was seeking pitching, and at the time, it was considered one of the most surprising deals in the history of the game.

Canseco would return for one season in 1997 and had a 23 Home Run Season.

His overall numbers with the Athletics would see him blast 254 Home Runs with a Slugging Percentage of .507.  He was also a five-time All-Star and three-time Silver Slugger with Oakland.