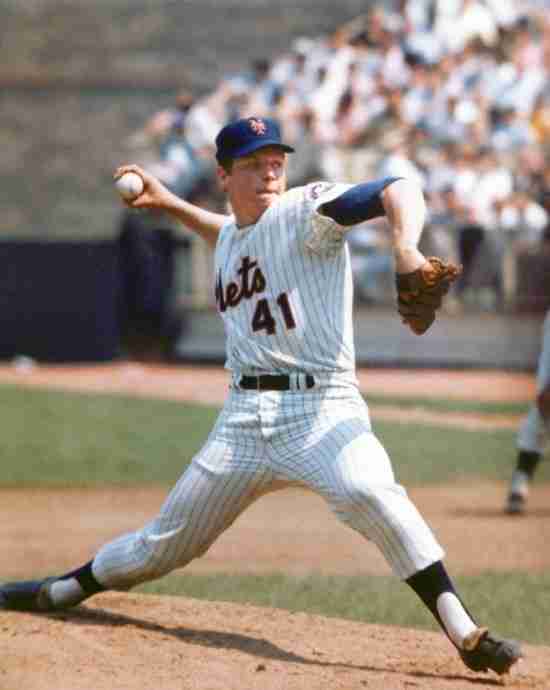 Prior to the recent induction of Ken Griffey Jr., Seaver entered Cooperstown with the highest percentage from the voters, which considering he was one of the greatest Starting Pitchers that ever lived was fitting.  While he did not play his entire career in New York, “Tom Terrific” was at his Hall of Fame best during his years in the Big Apple.


Seaver entered the Majors in 1967 winning the Rookie of the Year for the last place Mets and again would have an All Star year in ’68.  In 1969, Seaver would win the Cy Young and in baseball folklore was a huge part of the Miracle Mets Championship team.

Seaver would take them to the World Series again, though this time in a losing effort in 1973 but this run with the Mets saw him win two more Cy Youngs, three ERA Titles, three WHIP Titles and five Strikeout Titles.  A discrepancy in pay, specifically with the Mets Chairman, M. Donald Grant saw him traded to Cincinnati in what was called the “Midnight Massacre” and the Mets fans were deprived of seeing Seaver continue to be an elite player.

He would be traded back to New York and played there for one season in 1983 and after being left unprotected in a free agent compensation draft he would go to the Chicago White Sox at age 39, still having a couple of good years left in him.

At present, Seaver is the Mets leader in Wins and Strikeouts and probably will have that record for decades.  Decades will also be how long it will take anyone to overthrow Tom Seaver as the greatest New York Met of all time.

More in this category: 2. Dwight Gooden »