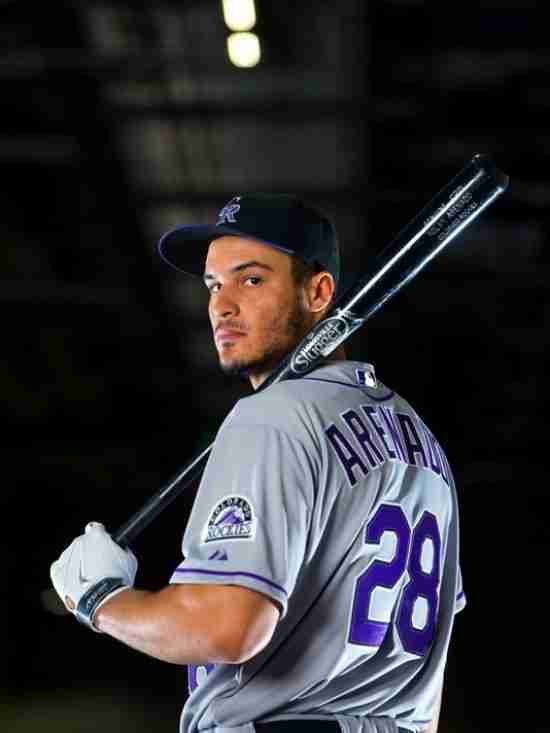 Nolan Arenado played his first seven seasons in Major League Baseball with the Colorado Rockies, where at one time he was the best Third Baseman in the National League.


Making the Rockies in 2013, Arenado won the Gold Glove as a rookie and continued to do so every season he played In Colorado.  Arenado's bat would catch up to his glove in 2015, which was the season he won his first Home Run (42) and RBI Title (130) while capturing his first Silver Slugger.  He posted similar numbers in 2016, again leading the NL in Home Runs (41) and RBIs (133) with a second Silver Slugger.  Arenado "only" had 37 Home Runs and 130 RBIs in 2017, neither of which led the NL, but he batted over ,300 for the first time, and was fourth in MVP voting.

As great as Arenado was, the cost-cutting Rockies traded the infielder to the St. Louis Cardinals.  Arenado left Colorado with 235 Home Runs and a .293 Batting Average.

As with any and every Colorado hitter, the Coors Effect is always a factor, and Arenado's home-road splits are in line with just about every hitter who ever donned a Rockies uniform.

But the thin, dry air doesn't have such an effect on his defense--and that is where he really stands apart from many of the other position players on this list. Already in nearly five seasons, he is ahead of league averages in both range factors (per-game and per-nine innnings) and fielding percentage; this 2016 season, with about 20 games left, he has committed only 8 errors at third base in 384 total chances for a .979 percentage. I can't believe he's already at 103 defensive runs saved for his career, but I guess the highlight reels aren't overselling him.

Arenado's already at 26.6 bWAR, with a 12.2 WAR for his defensive play. In his first five seasons, Mike Trout compiled a 37.9 bWAR. Of course, Trout is otherworldly , a once-in-a-ge neration guy. Bryce Harper, usually named as the next-best player in MLB, compiled a 21.4 bWAR in his first five seasons, while Manny Machado, Arenado's closest competitor at third base, racked up a 24.4 bWAR, with a 10.1 WAR for his defense.

So, Arenado is already in the discussion as one of the best players in MLB. (Kris Bryant, another hot-corner phenom, is just finishing his third season, so it may be a bit premature to start including him--let's see if he has a Harper hiccup first.) And even if you claim inflated offensive numbers from playing in Denver, his glove and arm seem to work just as well at sea level.

Is it too early to start discussing his Hall of Fame chances? Of course it is because that is such a long way away, and anything can happen (see: Nomar Garciaparra) , but if he stays healthy and productive, we're looking at a Mike Schmidt- or a Chipper Jones-calibe r third baseman.
Quote
Refresh comments list
RSS feed for comments to this post