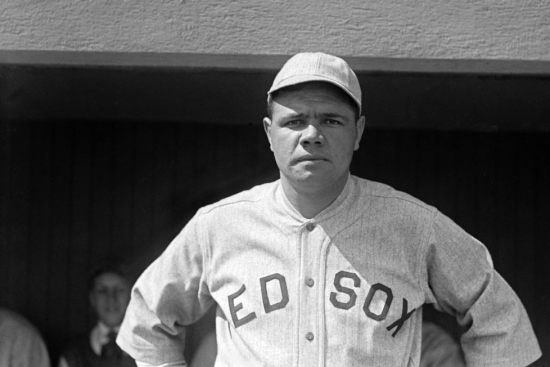 We are guessing that some of you are thinking that we are insane on this one.

Frankly, we thought we were too.

We will defend this rank with a straightforward fact.

Babe Ruth is the only player on any Major League Team to be in the top 40 in bWAR as a Position Player and as a Pitcher.  Remember, this is not just any team.  This is the Boston Red Sox, who have been around since the beginning of the American League.  Is this not one of the most outstanding accomplishments ever?

While everyone will always think of Ruth as a hitter and Yankee first, he was a Red Sox Pitcher first, and a very good one at that.  Debuting for Boston in 1914, Ruth broke out in 1915 with am 18-8 record and a 2.44 ERA.  While he did not pitch in that post-season, the Red Sox won the World Series that year.

Ruth would have his best season as a Pitcher in 1916 and had there been a Pitcher of the Year accolade that season, and he would have been in serious contention for it.  Ruth went 23-12 with a league-leading 1.75 ERA.  The Red Sox would win another World Series, though this time, he participated winning a game, and posting a 0.64 ERA over 14.0 Innings.  Ruth would go 24-13 with a 2.01 ERA in 1917.

The owner of the Red Sox, Harry Frazee, allegedly was looking to finance his theatrical ambitions, and the New York Yankees swooped in and made an offer of $100,000 for Ruth.  That was a lot of money in 1919, but what would transpire would be the worst transaction in Red Sox history.  Ruth became the greatest hitter in the history of the Yanks, if not in all of baseball.  As for Boston, they would not win a World Series until 2004, thus lifting "The Curse of the Bambino."