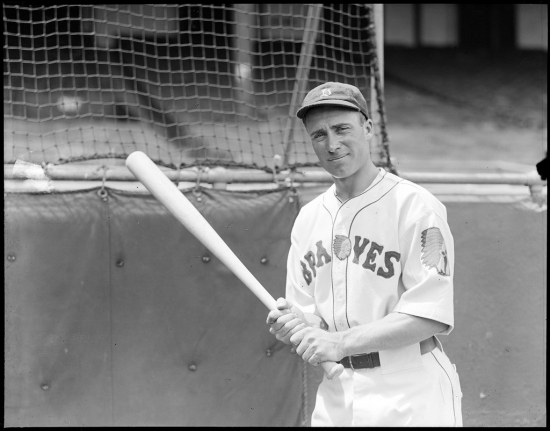 Wally Berger was one of 18 starters in the 1934 All Star Game and the other 17 are in the Hall of Fame.  We aren’t necessarily saying that Berger is a Hall of Fame snub, but we will state that the Outfielder was a very good player who at one time was spoken in the likes with some elite talent.

As a rookie in 1930, Berger set the tone for what he would do as a Brave with 172 Hits, 38 Home Runs, 119 RBI and a .310 Batting Average.  He would slip in his second and third year in terms of power but he still collected a lot of hits and batted over .300.  1933 would see the origin of the All Star Game and Berger played in the first four of them.  His power game came back and he hit 25 or more in each of those seasons, peaking with a National League leading 34 Home Runs and 130 RBIs in 1935.  He was traded early in the 1937 season to the New York Giants.

Berger did not have the fortune of playing with very many good Boston Braves teams and may not be remembered for being as good a player as he was.  After he was traded he was never the same player due to shoulder issues but what he accomplished in Boston should be remembered in the Braves organization.  He had 199 Home Runs with a .304 Batting Average for the team.