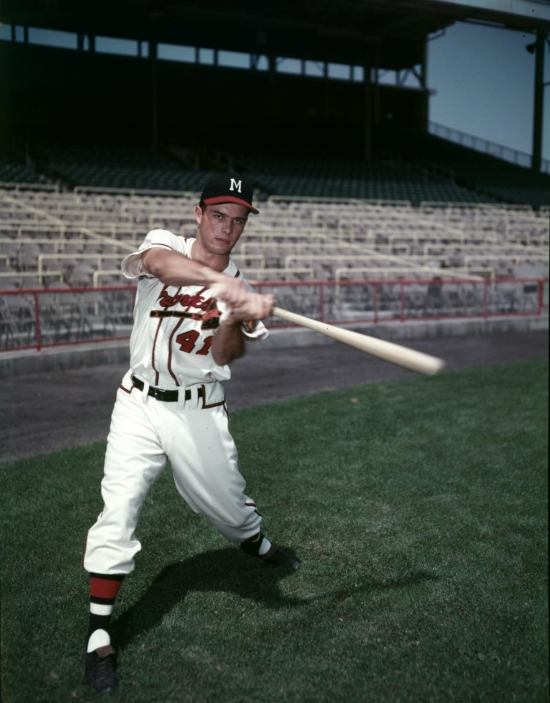 The only player in franchise history to play for the organization when the team was in Boston, Milwaukee, and Atlanta, Eddie Mathews is historically regarded as one of the best Third Baseman in the game’s history.

Mathews debuted in 1952 with the Boston Braves where he finished third in Rookie of the Year voting but in 1953 when the franchise moved to Milwaukee he would become an All-Star for the first of nine times.  This was only his second season of seventeen years in the Majors yet it was arguably his best as he had career highs in Home Runs (47, which was also enough to lead the NL) Runs Batted In (135), a sweet Slash Line of .302/.406/.627 and he was second in MVP voting.  This isn’t to say that Mathews declined after this because he certainly did not.  Paired up with Hank Aaron, Mathews was one half of the most powerful dup in the National League.  The Third Baseman would have three more 40 Home Run Seasons, was a four-time leader in Walks and again would have a second-place finish in MVP voting (1959) while finishing in the top ten two other times.  It also can’t be forgotten that he was a critical part in the Braves winning the World Series in 1957.  He was also more than decent on the defensive side of the ball as he was a two-time leader at his position in Total Zone Runs and was a top-five finisher on seven more occasions.

Eddie Mathews was traded after fifteen seasons with the Braves and in his last year in the Majors he would win his second World Series ring in a minor role with the Detroit Tigers in 1968.

Mathews would be chosen for the Baseball Hall of Fame in 1978 on his fifth year on the ballot.