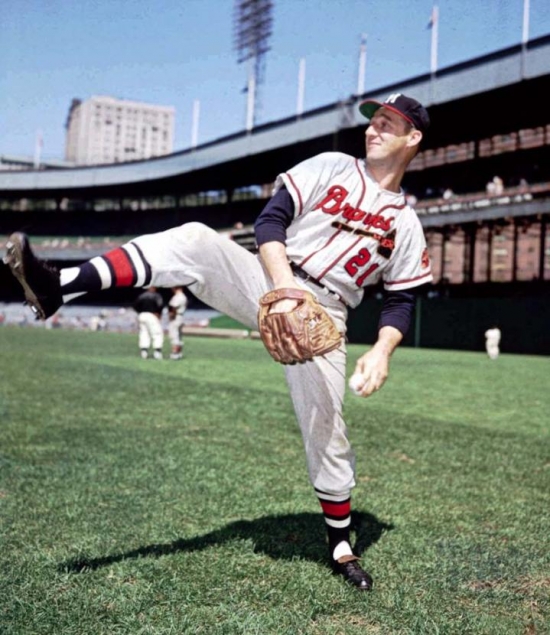 Not only are we comfortable saying that Warren Spahn was the greatest Pitcher in Braves history he is in the top ten all-time and the greatest left-hander ever.

Calling anyone the greatest Braves Pitcher of all time is no small statement considering the legends who took their mound.  A Cy Young winner in 1957 (the inaugural one actually) Spahn had a later start as he debuted for the Boston Braves in 1942 but missed the next three years due to military service.  The southpaw would emerge as an All-Star for the Boston Braves winning 21 Games and the ERA and WHIP title while also eating the most Innings.  This would become a pattern for the next decade and a half.

21 must have been his favorite number as he would win exactly that amount of Games seven times while having two other 20 Win seasons.  Leading the NL in Wins eight times, 356 of his 363 Wins were with the Braves and whether it was in Boston or Milwaukee (where they moved to in 1953) it could always be counted on that Spahn would win a lot, strikeout his share of batters and keep his ERA down.  This is also a 17-time All-Star, a three-time ERA leader, and four-time Strikeout leader.  He won the 1957 Cy Young Award when it was awarded to the best in both leagues and he was also runner-up for it the next three years.  Let’s not forget too that he was the ace of the staff that won the 1957 World Series.

Sabremetrically speaking, Warren Spahn never finished first among the Pitchers but he was second four times, third twice, fourth once and was fifth four times.  From 1949 to 1959 he was never out of the top five!  We haven’t even mentioned either that he hit 35 Home Runs over his career.

Spahn would enter the Baseball Hall of Fame in 1973, his first year on the ballot and he will not be dislodged from this spot at #2 for decades to come.  His number 21 was inducted by the Braves in 1965, and in 1999, he was one of four former players to be enshrined into the Braves Hall of Fame.