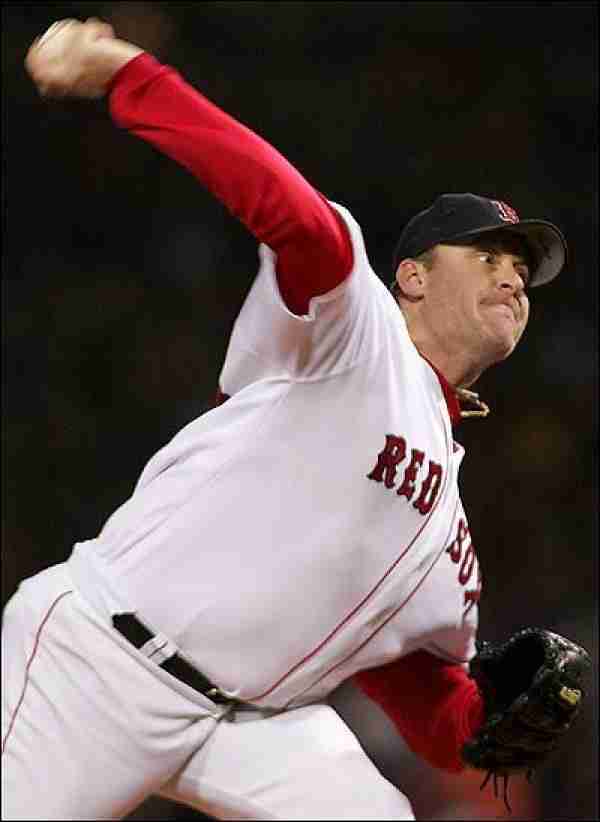 For the record, we love outspoken athletes. They may not always be popular with fans (and other players), but they sure make for far better sound bites than “we gotta go out there and give 100 percent” or other such statements from the “Athlete’s guide to dealing with the Media”. Ironically, Schilling is now part of the media, but remains as outspoken as ever.


Schilling attracted attention with his arm too. Although he has only 216 career Major League victories, he has a career WAR of 69.7, which ranks him in the top thirty all time for Pitchers. He was a strikeout machine who also rarely walked batters, as shown by his number two career ranking in Strikeouts to Walks Ratio.   Schilling also rose to the occasion even more in the Post Season, where he posted an 11 and 2 record, a World Series and NLCS MVP, three rings and a WHIP under one.

Curt Schilling’s famous bloody sock from the 2004 Hall of Fame is already in the Baseball Hall of Fame. Logic dictates that there is a solid chance that he will join his famous hosiery, though that would have to come from the Veteran's Committee, as his political views and media feuds kept him out via the voters.

12
+2 #11 DarkSide830 2019-07-18 21:49
Wins certainly don't have the value they are sometimes made out to be, but should not be the end all be all. winning on a bad team is a helpful sign, but I don't think it should go both ways. as for Cy Youngs, is it really better a guy is the best player one year or the second-best 3 times? legendary numbers in both the regular and postseasons tell enough of a story for themselves. We all know why he isnt in, though, and it isnt actually based on baseball. I get that point of view, but I dont think that is how the hall should work, especially with some other questionable charcaters in the hall already.
Quote
0 #10 Darryl Tahirali 2016-07-18 20:57
Quoting Clover Nico Star starryclovers:

Schilling is still a Hall of Fame-caliber pitcher who deserves to be in based on his career.

My perspective is that the Hall is a shrine for baseball greatness, not human decency. There are already some unsavory characters in the Hall: Do we eject them retrospectiv ely? Do we say that now we're being moral and decent?
Quote
-8 #9 Clover Nico Star starryclovers 2016-04-29 20:49
I supported him going in until he revealed himself to be a racist, homophobe and transphobe.
Quote
0 #8 Chrome Dog 2016-04-13 15:55
Almost - but his regular season #s aren't good enough.
Quote
+1 #7 Darryl Tahirali 2016-01-20 00:47
Quoting Gus_Schultz:

Curt Schilling was 22-6 for the Diamondbacks in 2001, 23-7 for the Diamondbacks in 2002, and 21-6 for the Red Sox in 2004. He was second in the Cy Young Award balloting each of those years; in 2001 and 2002, there was a teammate named Randy Johnson who took the Cy Young awards away from him.
Quote
+3 #5 JohnfromNH 2015-03-29 22:53
Three World Series rings, one WS MVP, one LCS MVP, 11-2 lifetime postseason record. Not to mention: risking his career by having a never-before -done procedure done so he could pitch! The next season, he willingly offered to close, greatly lengthening the time it took him to return to starting form and probably cost him 30+ wins.

One reason he "only" has 216 wins is that in his prime, he was on some REALLY bad teams. (He once had a 3.19 ERA and a losing record.) He was on four 90-loss teams and two 85+ loss teams with the Phillies.
Quote
-8 #4 Gus_Schultz 2015-03-29 21:25
Overrated narcissist. Cares about nobody other than himself. Only a meager 216 wins in the hall? Never won 20. Never won a Cy Young, never lead the league in ERA. Overrated.
Quote
-7 #3 Gus_Schultz 2015-03-29 21:24
Overrated!! Never won 20, never won a Cy Young, an ERA title and a meager 216 wins. Plus he was a cancer in the locker room. The image of him throwing a towel over his head as his colleague Mitch Williams pitched in the /93 WS says it all. Egocentric and total narcissist. Now he cost the state of Rhode Island millions because they were dumb enough to invest in his computer game?

Quote
0 #2 JohnFromNH 2013-04-16 00:00
He should be in Cooperstown. ..mostly on the strength of his incredible postseason performances with Boston & Arizona. He should have won a Cy Young...got screwed in 2004!
Quote
12
Refresh comments list
RSS feed for comments to this post