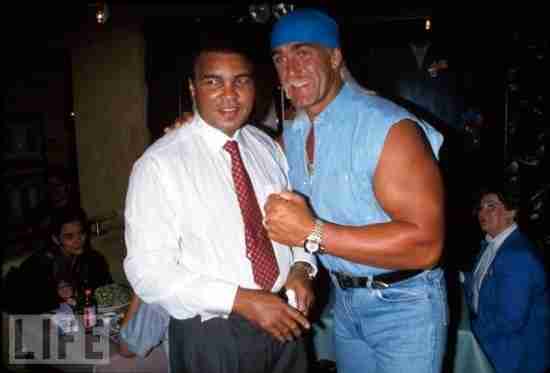 The tradition of tying in boxing and wrestling has been a long one.  Muhammad Ali was a huge part of that stemming from his match against Antonio Inoki, confrontations with Gorilla Monsoon and other assorted appearances while he was the Heavyweight Boxing Champion of the World.  After he retired, Ali was the special referee at the original Wrestlemania, and even in his weakened state has still been a friend to the business as evidenced by his appearance at Collision in Korea and Halloween Havoc 1994.  Ali lived up to his moniker as the greatest and for a man who has earned so much respect in the sports world he has shown it back to the wrestling.  It is difficult to put any other celebrity above him.

Should Muhammad Ali be in the WWE Hall of Fame?

Should Muhammad Ali be in the WWE Hall of Fame?

Tagged under
Tweet
More in this category: 2. Cyndi Lauper »

+3 #1 unopeneddoor -0001-11-30 00:00
Should have been the FIRST celebrity induction.
Quote
Refresh comments list
RSS feed for comments to this post