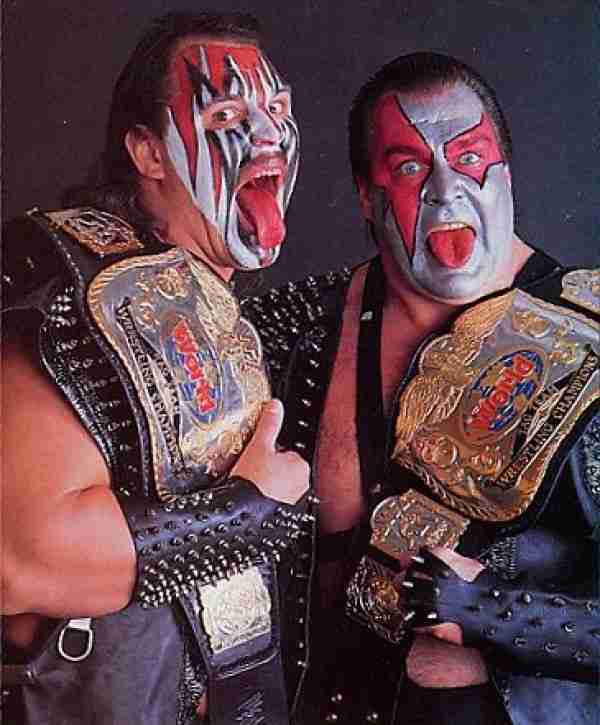 Now here is an interesting case.  Ax (Bill Eadie) wrestled successfully as Bolo Mongol, The Masked Superstar and The Super Machine before donning the face paint.  Smash (Barry Darsow) was also making money as Khrusher Khruschev before becoming Smash and had good runs as The Repo Man and The Black Top Bully after.   It is hard to argue though that in each case their greatest recognition was together as Demolition.

Originally looked as Road Warrior knock offs they blazed their own path as a horror movie gone wrong pair that destroyed everything in their path.  They weren’t chiseled like the Road Warriors and maybe that is what made them look even scarier; they looked like they really could exist outside the ring.  Blessed with the longest reign in WWF World Tag Team history they were also its most popular.  They “jumped the shark” with addition of Crush, and had Bill Eadie’s health been a little better, the series of matches against Hawk and Animal in 1990 could have been far more special than it was.  Regardless, they were an important tag team when it still mattered.

Should Demolition be in the Hall of Fame?

Should Demolition be in the Hall of Fame?

0 #4 Edward 2020-06-19 02:53
Unfortunatel y in recent years there have been lawsuits over concussion issues. Also in the 1990's Axe sued the company for not giving him permission the use the name "Demolition" .
Quote
+4 #3 Adam Domo 2017-09-18 22:05
now that they're involved in a law suit i'm afraid they might not get inducted until they're dead... which is a crying shame. The longest running tag champs of all time (before new day)...there 's politics involved here.
Quote
+9 #2 Turd Burgler 2015-01-16 12:01
Of all the poor choices the WWE HOF has made (always based on favoritism or money), this is one of the worst! The Demolition meant more to WWE than Legion of Doom (who were for the most part of their careers competitors of the Federation), and as the longest reigning champs still to this day... the WWE HOF is a joke without them! The Four Horsemen meant NOTHING to WWE but it was profitable to induct them.
Quote
-9 #1 stewy 2013-03-04 05:38
they never gave me a stiffy I never cared for them!!!
Quote
Refresh comments list
RSS feed for comments to this post