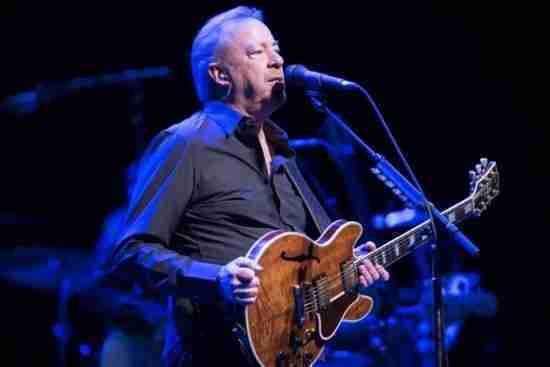 With a series of hits in the 1970’s, Boz Scaggs was a Blue Eyed Soul star who incorporated subtle elements of Funk and Disco to the songs that made him famous. It was those trace elements that allowed him to reach a broader range of fans and discover his earlier catalogue which featured a wide range of his abilities. It always seemed that Scaggs was on either end of critics and fans alike as he seemed to be loved or hated. It could be this disparity of opinion that could be keeping Scaggs out.

Should Boz Scaggs be in the Hall of Fame?

+4 #3 William Evans 2014-02-02 16:34
Definitely unique enough and talented enough and acclaimed enough to be in the company of most in the Hall of Fame. Definitely put him in. One of my all time go to music artists.
Quote
+2 #2 Darryl Tahirali -0001-11-30 00:00
Considering that Boz Scaggs has been long-time pals with Jann Wenner, I'm surprised he hasn't had a stealth nod for the Hall yet, but maybe Wenner realizes that his buddy simply doesn't have the credentials. (Although Percy Sledge got in, so don't be surprised by anything at this point.)What hasn't been mentioned here is that Scaggs didn't begin as the American Robert Palmer before going disco. No, siree. Betcha didn't know that Scaggs was not only school chums with Steve Miller, he was Miller's singer and guitarist on Miller's first two album, both recorded in late 1960s San Francisco? You didn't? Then, did you know that before he steered toward the middle of the road, Scaggs's first solo record was a fine rock album? No? Ah, sit down, child. Listen and learn.Scaggs was part of Miller's band for Miller's first two records, Children of the Future and Sailor. On the former, Scaggs contributed "Baby&# 39;s Calling Me Home," but he really made his mark on the latter. Although Sailor's signature tune is Miller's "Living in the USA," Scaggs makes an impression not only as the singer but also with his songwriting contribution s "Overdr ive" and the stops-out rocker "Dime-a -Dance Romance.&quo t;When Scaggs left, he recorded, with the help of his pal Wenner, his first solo album at Stax/Atlanti c's Muscle Shoals studios in Alabama. Indeed he used its vaunted rhythm section, which included guitarist Duane Allman, for an excellent rock- and blues-infuse d set that included the opening soul shots of "I' m Easy" and "I' ll Be Long Gone" and Scaggs's faithful cover of country legend Jimmie Rodgers' s "Waitin g for a Train." But Boz Scaggs's centerpiece is surely the eleven-minut e tour de force cover of bluesman Fenton Robinson' ;s "Loan Me a Dime"; not only does Scaggs top himself on the vocals, but Allman unspools one of his greatest recorded solos as both men push each other to impressive heights.Boz Scaggs was, for me, this smooth-voice d singer's high point, although he was still capable of "slick grit" such as "Dinah- Flo" and "Full-L ock Power Slide" (from My Time) before becoming the disco-pop merchant he is best-known as being. In a sense, Scaggs is the poor man's Rod Stewart, a fine singer who had genuine rock credibility before going completely commercial. Is it enough to get him into the RRHoF? Nah, but that doesn't mean I enjoy "Dime-a -Dance Romance" ; or "Loan Me a Dime" any less.
Quote
+3 #1 Musicologist999 -0001-11-30 00:00
Boz Scaggs has made some great, catchy music in the past, and Silk Degrees is an all-time pop classic. But his solo career has been pretty scattershot since then, and you can usually find him being played to the hilt these days on Light-Rock stations, which does not bode well for a Hall Of Fame induction. Then again, Neil Diamond gets played on Light-Rock stations, and he IS being inducted! So, maybe there's hope for Boz after all.
Quote
Refresh comments list
RSS feed for comments to this post