THE IRON MAIDENS AT WALLY'S PUB IN HAMPTON, NH

Buy your Tickets to see The Iron Maidens at Wally's Pub in Hampton, NH HERE for as little as $51! 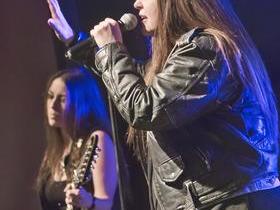 Quote
+17 #8 Brendan 2015-04-14 07:57
Iron Maiden deserve to be in. They have not sold out. Their last four albums, and probably their new one this year was as good as their famous 1980s albums. They have sold millions of albums and just as many t shirts. They are huge and probably too huge for the rock and roll hall of fame.
Quote
+11 #7 Mickey 2014-10-14 02:53
People can say what they want, but Maiden are one of the biggest bands in the world. The reason they keep been so big, is that their new material is damn good! Unlike other bands, Iron Maiden can still pull it off live, and they are touring the world massively.
Maiden´s new material is fresh, but with their significant style and sound. If you don´t believe me, listen to songs from their new album -songs like "The Talisman", "The Alchemist", "When The Wild Wind Blows" and "Coming Home" are just amazing!

But hey, they are too true to their style, and to their fans, which means that they will probably never be inducted -They are too good for that ;)
Quote
+23 #6 justin 2013-06-06 00:00
Maiden definitely should be in by now. Deep Purple, Priest, Motörhead and Maiden should all get in together next year hands down. People need to rally and petition like fans of Rush and Genesis did. They wouldn't even be in if it wasn't for that. If Deep Purple and Motörhead arnt at least put in first next year it's a sham.
Quote
+31 #5 Ben Hobson 2013-05-21 09:41
So, what Mark, do you believe that speed is everything? A faster song doesn't make it a better one. Metallica would never have existed without Iron Maiden and if anyone questions their songwriting abilities just listen to When The Wild Wind Blows. Released 35 years after their creation, it just goes to show there has never been a band as consistently brilliant as Iron Maiden. Don't get me wrong, I love Metallica as well, but they went more commercial and got famous. Iron Maiden never did, they stayed true and became almost equally as famous. I'd go as far to say that they are the best metal band of all time. Up. The. IRONS!
Quote
+29 #4 Kohl Methven 2012-11-11 08:34
The fact of the matter is that they have put out amazing music for 30 + years straight and have a massive following. They are named countless times on others lists of influential artists. It blows my mind that they aren't in yet
Quote
-60 #3 Mark Nieuweboer 2012-09-10 16:12
Iron Maiden did nothing Deep Purple and Judas Priest didn't do before or Metallica afterwards. Their songs aren't even as fast as Highway Star, Exciter and The Four Horsemen.
The most superfluous metal band ever.
Quote
-11 #2 Sean -0001-11-30 00:00
I agree with that statement 100% (they really annoy me but their influence on metal was massive). Deep Purple first though.
Quote
+15 #1 jimmy26 -0001-11-30 00:00
i never liked iron maiden but i will argue until i am blue in the face that they should be in.
Quote
Refresh comments list
RSS feed for comments to this post