Harlem Heat to the WWE HOF 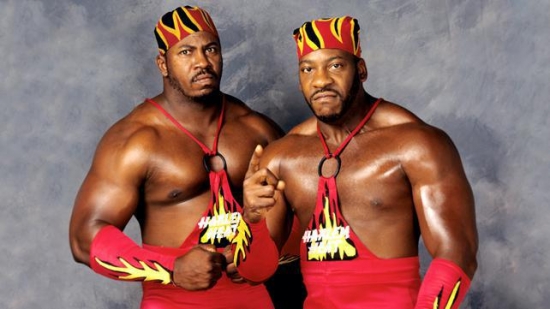 We consider this one a bit of a surprise.

As we inch closer to Wrestlemania it also means that the WWE Hall of Fame is drawing closer.  New inductees were announced today and in what has to be a mild shock, it is former WCW World Tag Team Champions, Harlem Heat.

Booker T (Booker Huffman) & Stevie Ray (Lash Huffman) are half-brothers from Houston, Texas and they first gained exposure competing as the “Ebony Experience” in the Global Wrestling Federation where they would win their tag team titles three times.

The duo would be brought into WCW at the request of Sid Vicious who they would team up with (along with Vader) at the 1993 Fall Brawl. They would lose the match but a year later (with Sherri Martel as their manager) would win the WCW World Tag Team Championship on WCW Saturday Night in early 1995 by defeating the team of Stars and Stripes (The Patriot & Marcus Alexander Bagwell).  They would lose their belts to the Nasty Boys at Slamboree 1995, though they actually regained it on WCW Worldwide BEFORE they lost it due to the pattern of WCW tapings.  Dick Slater and Bunkhouse Buck won the belts in July and they would lose them back to Harlem Heat at Fall Brawl.  The reign lasted one day as they were beat by the American Males (Marcus Alexander Bagwell and Stevie Ray) though a week later they won it back.

With all due respect to their opposition in 1995, 1996 would see an uptake in their competition.  On the January 22 Nitro they would lose to Sting and Lex Luger who would hold the belts for six months before losing them back to Harlem Heat in June.  Their fifth reign would last only a month as they were beaten by the returning Steiner Brothers but three days later they won their belts back.  This reign lasted two months until they were beaten by The Public Enemy who held it for one week before dropping it back to Harlem Heat but they would lose to the NOW team of Kevin Nash and Scott Hall.

The loss ended their main run as Stevie Ray was injured and Booker T would become a single and would go after and win the Television Title.  When Stevie Ray returned he joined the New World Order and while the brothers were on opposite sides of the wrestling bubble they coexisted. They reunited in 1999 to win the titles two more times but they would break up and feud over the name Harlem Heat. After their feud, Booker T would go back to singles and would eventually win the WCW World Heavyweight Championship. Booker would take the WCW World Title to the WWE and he would win man titles in the WWE.  Stevie Ray would never compete in a WWE ring.

The induction of Harlem Heat marks the second one for Booker T as he was included as a single in the Class of 2013.  This makes Booker the third double inductee following Ric Flair and Shawn Michaels who will be inducted a second time this year with D-Generation X.  Stevie Ray was on our last Notinhalloffame.com list ranked at #195.

We here at Notinhalloffame.com would like to congratulate Harlem Heat for receiving this honor.

This would be the first of ten title reigns

More in this category: « RIP: The Destroyer Our Top 50 All-Time Arizona Diamondbacks are now up »