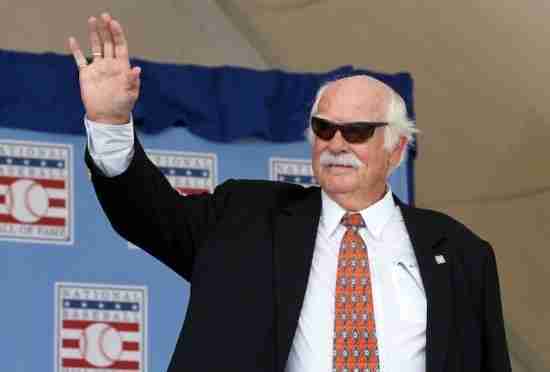 It has felt that for years that existing Baseball Hall of Famers have been constantly stating that PED users have no place in Cooperstown.  As such, it took us by surprise when Hall of Fame Pitcher, Gaylord Perry said today that he thought Barry Bonds deserves to be inducted.

It took place in a conference call from Diamond Resorts, and while it was not exactly a glowing endorsement, it was considering that it came from a Hall of Famer over the age of 60:


“I think he’ll get in eventually.  If you have a player like that, pretty soon, you put him in.’’


While this is not exactly a ringing endorsement, compared to his Hall of Fame peers it really is!

Perry may have had a somewhat lackadaisical endorsement of Barry Bonds, he had an adamant stance against Pete Rose:


“Pete did the worst thing possible, worse than steroids,…he put money on games, win or lose. He’s paying the price.”


Quite the different stance regarding Rose isn’t it?

Gaylord Perry was not the only Baseball Hall of Fame inductee who was on this conference call.  John Smoltz was also on this call and he had a softer stance in regards to Bonds:


“I’m trying to figure out what is actual, and what isn’t,  To me, the one thing forgotten in this thing is the mission statement. Character is a big part of it. You have to not only have the numbers, but the character that matches it


If you have first-hand knowledge that a player used, or has publicly acknowledged it, I think it’s an easy decision. When it is circumstance and evidence, and you don’t know, and just follow the rumor mill, that’s difficult for the writer to be judge and jury.”


This is not exactly an endorsement for Bonds, but it is not a condemnation either.

As it stands now, Bonds and his “PED brethren” are on the outside looking in, but from revealed ballots it looks like he and his ilk are inching closer to the 75% needed to get in.  As some writers have put it, the fact Bud Selig has been chosen by the Today’s Game Committee, it is harder to omit the players who juiced up under his watch.


The Baseball Hall of Fame will announce their Class of 2017 on the 17th of January.

This could be the most interesting vote yet!

More in this category: « The College Football HOF Announces the 2017 Class The Top 50 Florida Panthers are now up! »