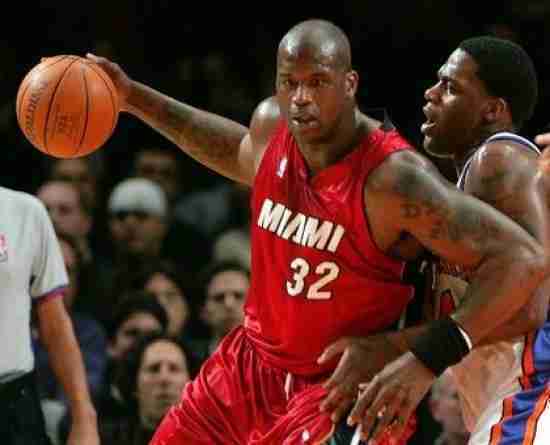 Those who visit us on a regular basis know that we are methodically adding the Top 50 Players for every North American Team (NHL, NBA, NFL and MLB) and after that the intent is to look at how each team honors their former players and executives by way of Rings of Honor, Franchise Halls of Fame and Retired Numbers.

As such, it is news to us that the Miami Heat have retired the #32 of Shaquille O’Neal, making him the third player in team history to earn such an honor.

When Shaq arrived in Miami, he was ushered in an 18 wheeler with “Shaq Diesel” written on the side of it.  For this ceremony he was presented by a miniature replica of that beast of a vehicle, though this time it was driven by his mother.

O’Neal was traded to Miami in 2004 after the Lakers controversially lost the Finals to the Detroit Pistons, a series that on paper that Los Angeles had no business to lose.  The stories of Shaquille O’Neal and Kobe Bryant’s inability to get along are now NBA folklore, and one of them had to go.  It was Shaquille who would leave, though he would take his scoring and rebounding skills with him.

It would be a good fit in Miami as he would now be paired with the young Shooting Guard, Dwyane Wade.  Together, in 2006 they would win the NBA Championship, the first in Miami Heat history.

Notably, this is the second NBA team to retire his number as the Los Angeles Lakers did the same last year.

More in this category: « Nominees Announced for the Basketball HOF Dave Abbruzzese talks about his omission from the RRHOF »