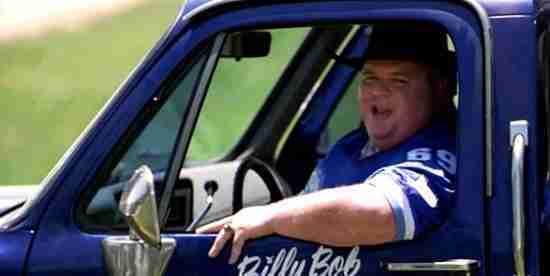 18 Jun
2016
Not in Hall of Fame
Fans of our Fictitious Athlete Hall of Fame likely remember the late 1990’s film, Varsity Blues.  Sadly, we learned that Ron Lester, who played troubled Offensive Lineman, “Billy Bob” passed away at the age of 45.

Lester, who was morbidly obese during the time of the film, had lost most of that weight and did not look remotely like his former self.  Despite that weight loss (or perhaps because of it), Lester developed severe kidney and liver problems and had been in the hospital the last four months.  He was taken off of life support, as per his request.

The role of “Billy Bob” was the biggest of his career, and with the exception of a parody role of his Varsity Blues performance in “Not Another Teen Movie”, he was never in a major film again.

We here at Notinhalloffame.com and the Fictitious Athlete Hall of Fame extend our condolences to the friends and family of Ron Lester at this time.
Tagged under
Tweet

More in this category: « The Pete Williams VS Mark Coleman fight to the UFC HOF Our Fictitious Rock and Roll HOF has announced the Semi-Finalists »