The Miami Heat will retire Shaquille O'Neal's Number next year 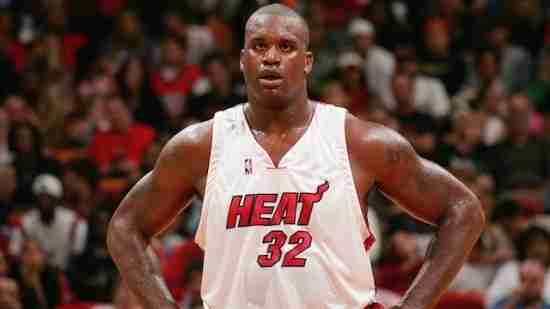 10 Feb
2016
Not in Hall of Fame
As you have noticed, we have been working on the Top 50 of every North American Franchise.  This will eventually lead into a look at the retired numbers and franchise Hall of Fames, which brings us to the news that the Miami Heat will be retiring the number of former Center, Shaquille O’Neal at an undisclosed date next season.

O’Neal spent three and a half seasons with Miami where he helped the team win their first NBA Championship in 2006.  As a Heat, O’Neal would statistically have 19.6 Points and 9.1 Rebounds with a PER of 23.9.  He would also win two Shooting Percentage Titles and earn a pair of First Team All-NBA honors as a member of the Heat.

Shaq’s tenure with the Heat did not end well, as he forced a trade to the Phoenix Suns, but time heals and realistically Miami would not have won their first title without him.

The retirement of O’Neal’s number marks the second time that he has had his jersey retired as the Los Angeles Lakers did so a couple of years ago.  This is the fourth number retired by the team following Alonzo Mourning, Tim Hardaway and Michael Jordan, even though the latter never played with the team.

The Basketball Hall of Fame announced that the eligibility wait time was reduced, which made Shaquille O’Neal eligible for the Hall this year.  It is expected that he will enter the Hall of Fame immediately on his first try.

We here at Notinhalloffame.com would like to congratulate Shaquille O’Neal for his latest accolade.

More in this category: « Daniel Bryan Retires The Rock and Roll List has been Updated: Pearl Jam is now Number 1 »