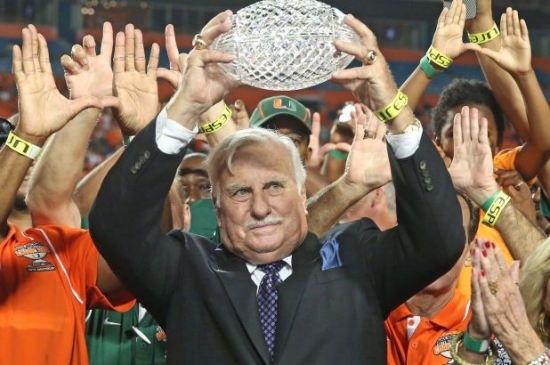 Howard Schnellenberger, the football coach who led the University of Miami to their first National Championship, died today.  He was 87 years old.

Before he took over the Hurricanes program, Schnellenberger had previously been a head coach for the Baltimore Colts and was coming off a four-year run as the Miami Dolphins Offensive Coordinator. The Hurricanes had never been a college football power before Schnellenberger arrived, and he oversaw an unexpected transformation, taking Miami from doormats to champions in five years.  He left the program after that 1983 National Championship, but the culture in Miami was forever changed, with the Hurricanes winning three of the next six titles.

Schnellenberger went on to coach Louisville, Oklahoma and in 2001, he built the Florida Atlantic program from scratch.  He had an overall college coaching record of 158-151-3.

We would like to offer our condolences to the friends and family of Howard Schnellenberger.

Kirk Buchner, "The Committee Chairman", is the owner and operator of the site.  Kirk can be contacted at [email protected] . Email This email address is being protected from spambots. You need JavaScript enabled to view it.
More in this category: « Our All-Time Top 50 Boston Red Sox have been revised Our All-Time Top 50 Chicago White Sox have been revised »