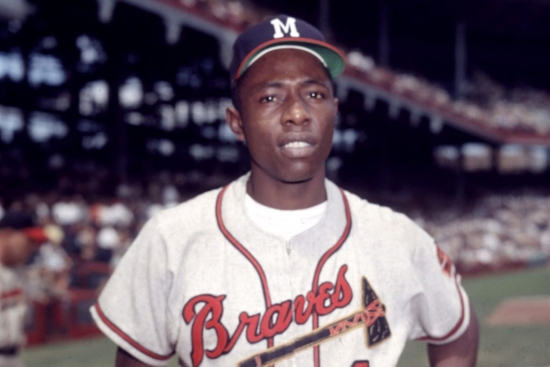 This is a sad day not only for baseball, but for all of sports.

Actually, for all of humanity.

Hank Aaron, who hit 755 career Home Runs, breaking the record held by Babe Ruth, died today at age 86.  Aaron faced death threats while he was chasing Ruth’s record, primarily because of the color of his skin.

After a brief time with the Indianapolis Clowns in the Negro Leagues, Aaron joined the Milwaukee Braves in 1954 and would become the greatest player in franchise history, which is no small feat considering the Braves are an organization spanning well over a century.

Aaron became one of the most prolific hitters in the game of Baseball, collecting over 3,771 Hits with 755 Home Runs, a batting combination that has no equal.  A master of consistency, Aaron had 15 30-Home Run Seasons, 14 seasons where he batted over .300, and he was named to every All-Star Game from 1955 to 1975.  Aaron was named the National League MVP in 1957, the same year led the Milwaukee Braves to their only title while playing in Wisconsin, and from 1955 to 1973, Aaron always received an MVP vote.

While Aaron’s Home Run totals have been eclipsed, he is still the all-time record holder in Runs Batted In (2,297) and Total Bases (6,856).

In 1999, MLB created the Hank Aaron Award, which is given to the player who had the best offensive year.  It is hard to imagine who better the honor should be named after.

Following his retirement, Aaron rejoined the Braves as an executive, serving in various capacities until his death.

We here at Notinhalloffame.com would like to extend our condolences to the fans, friends and family of Hank Aaron.