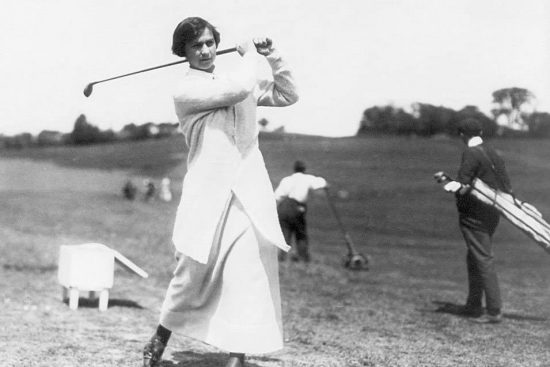 A couple of weeks ago, the World Golf Hall of Fame announced that Tiger Woods would be going into their Hall in the Class of 2021.  At the time of that proclamation, he was the only name announced, and we speculated if it would be a solo class.  In the last forty years, if there was any golfer who could be worthy as a sole representative, it is Woods.  The Golf Hall, who relaxed their 50-year-old minimum threshold, to 45 years of age, recently, likely did so that they could induct Woods five years early, so if the entire day was to be a celebration of just Woods, would it have been a surprise?

As it turns out, Woods will not be the lone inductee as in the past few days, two other inductees were unveiled.

The first was Marion Hollins, who will be entering as a Contributor. Hollins was a pioneer in the women’s game, having won the 1921 U.S. Women’s Amateur Tournament, and the Pebble Beach Women’s Championship seven times.  As good as she was as a player, it paled in comparison to what she did as a golf course designer, where she was truly ground breaking.  Hollins passed away at the age of 51 in 1944, and her achievements have been lost to history, though this induction should help to keep her accomplishments alive.

Today, former PGA Tour Commissioner, Tim Finchem, was named as the latest inductee.  Finchem took over in 1994, and held that position until 2016.  Under his reign, the PGA certainly has a higher profile than it did from when he first took over, though his fellow inductee, Woods, certainly had a lot to do with that.

It was also announced that a fourth inductee will be announced in the upcoming days.

We here at Notinhalloffame.com would like to congratulate the newest impending members of the World Golf Hall of Fame.

Kirk Buchner, "The Committee Chairman", is the owner and operator of the site.  Kirk can be contacted at [email protected] . Email This email address is being protected from spambots. You need JavaScript enabled to view it.
More in this category: « The University of Nebraska announces their 2020 HOF Class Major Update: Our Notinhalloffame Basketball List has been revised, Paul Pierce now #1 »